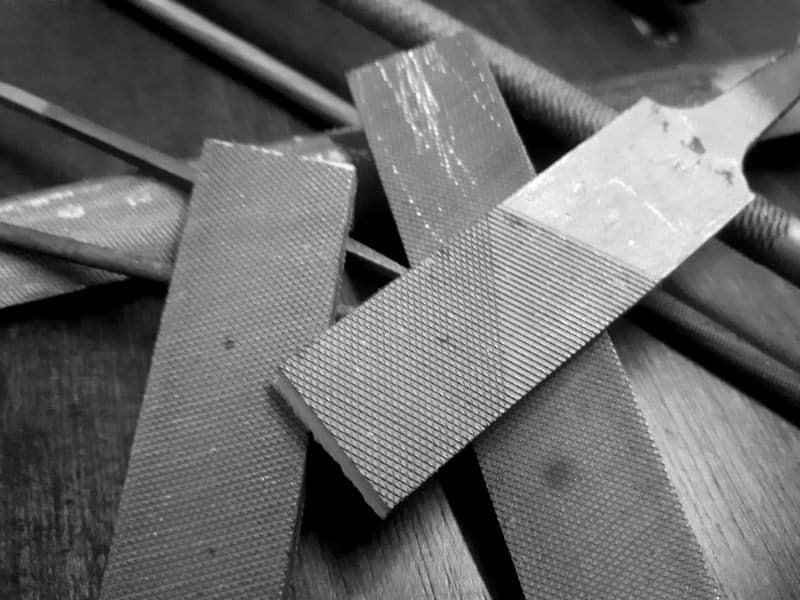 One of the fun parts of blacksmithing is that you can take a chunk of whatever and turn it into… whatever. Thing is, certain projects warrant specific kinds of metals. One super common old piece of metal that’s laying around in a rusty toolbox is a big, ugly, worn-out file.

So what are files made of? High quality files are commonly made of a hardenable steel like 1095 or W1. Cheap files can be made out of something considerably softer, and are often case-hardened. These files are generally unsuitable for anything that would require a particular hardness, like a knife, blade, or hard tooling.

Ultimately, though, you’re likely dealing with a mystery metal. Read on for a few tips and tricks, like how to identify the metal, what kids of files generally work best, and what they’re good for.

Ok, this is totally subjective and ultimately it comes down to what people have had good success with.

If you’re wanting something that will get nice and hard that can hold an edge, Nicholson and Simmonds brand files are generally made of the “good stuff”. Liogier (from France) has been making rasps for about a century and they work great for maintaining a cutting edge.

Here’s the thing though:

Many of even these higher-end companies are gradually switching over to case-hardened files. Basically, they’re cheaper to produce, and they can perform just as well as files if they’re done right.

In other words, if you’re wanting to make a knife or something out of a file, your best bet is to look for older files to work with. Otherwise, you’re taking a bit of a gamble when it comes to whether or not it can be heat treated by the standard heat-and-quench method.

If there’s no company logo or “made in (insert country known for good craftsmanship here)” stamped on the file, it’s a coin toss as to whether you’ll be able to get it very hard.

If it’s got something like “made in China/Taiwan/Korea/Mexico/India”, it’s probably not a high-performing steel. People usually don’t make things in low-cost areas because they want to make the highest quality products. They’re doing it on the cheap.

If you’re just practicing, or making something that doesn’t need to be hard, then this might not be a problem. If you’re trying to make a good knife, though, a lot of people with experience avoid files altogether in favor of using bought material that’s of a known steel. It’s a very demotivating experience when you spend hours making something that was doomed to fail from the start.

How to Get a “Reasonable Idea” of the Material

Notice here that I’m not saying that you’re going to know exactly what kind of steel you’re dealing with, but here are a few things that can help you to get a rough idea of whether or not the file is worth working on. This is all based on the assumption that you’re wanting to harden it. Although, from what I’ve seen, 9/10 people that are asking about file material are asking because they want a knife.

Anyway, here are some steps.

Yep, that’s right. Snap the end off the file and see what happens. Don’t snap the file in half, since you’ll probably want more material to work with. Don’t snap it at the tang, either. That end of the file is going to be annealed so that it doesn’t crack when you’re applying pressure while filing.

So snap it at the end opposite the handle. To do this without shattering the file into several small pieces, put about 1-1/2″ of the tip of the file into a vise and clamp it firmly. Then whack it with something near to where it’s clamped in the vise. That should snap it easily enough.

Since you probably don’t want 3/4 of a file or smaller shards of metal stabbed into your eye, take some practical safety measures. You can wrap the file in a cloth just above where you clamped it to catch any pieces that might have the inclination to lodge themselves into someplace sensitive. Wear safety glasses, too. At the very least, put on your safety squints. (-~-)

A file that’s hardened through will snap cleanly without any kind of bending. When you looked at the snapped surface, it’ll be a dull grey with no shiny or deformed bits. It’ll be a clean crack.

This won’t tell you how hard the file is. It’ll just tell you if it got reasonably hard. It’ll also help to more or less rule out the case-hardened files that are made with a dead soft material inside. Here’s a picture to show you what I’m talking about:

This isn’t the conclusive answer as to whether the steel will harden or not. All it is is a quick check that can give you a yea or nay so you can decide if you want to continue to the next step or not.

Honestly, this is the most thorough way to know if the steel is any good for what you’re wanting.

Anneal the steel so it’s nice and soft. Grind a bit of a V- edge on the tip of the file, at least 1/8″ down from where the tip originally was. This will get you to the core material that wouldn’t be affected by case hardening. Then heat it up bright cherry red and dip it in oil.

After that, you can sharpen and test the edge. Or just do a file test (file testing a file? Ironic…).

Ultimately, this will give you the best idea as to whether the file is going to harden the way you want it to. It’s better to test the heat treating now before you go down the path of sinking hours into making something absolutely gorgeous, only to find out that it’s dead soft and only good as an ornament.

You might already have your set way of checking hardness after a heat treat. If not, my absolute hands-down favorite way of doing it (aside from a super expensive Rockwell tester of course) is to use hardness testing files.

It’s basically a set of different files that will tell you how hard the metal is in 5Rc increments. It’s surprisingly accurate, and totally takes the guesswork out of heat treating. You can see the set that I use here. If you don’t mind shelling out a bit of cash, I highly recommend picking up a set.

Anyway, that pretty well covers what you need to know to make something cool out of a file. I’ve seen some really awesome knives made out of rasps, and I love that pattern that you get on the blade flats. If you want something truly original, there’s no need to shy away from a file.

If you’re looking for a little extra help on your project, here are a few other posts that might be worth a quick read:

How to Check the Hardness of Metal: A Complete Guide

Beginner’s Guide on How to Anneal Steel

And here’s a handy reference chart to help you gauge the temperature of steel by eye:

If you’re trying to find high-carbon steel from the scrapyard, I also wrote this guide to help you find the good stuff.