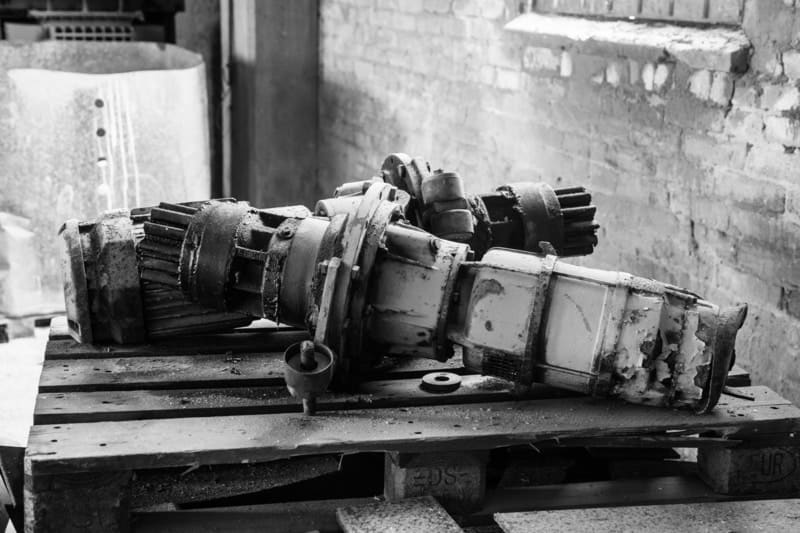 For the longest time I thought that the only way to properly check the hardness of metal was with a proper Rockwell testing machine. Thankfully, I’ve learned a few other methods and tricks over the years that have really made this more doable without needing a $2500+ machine.

In reality, there are a few different ways to do it, although the accuracy results and practicality will vary. In this article, I’ll go over some of these methods, the pros and cons, and how to pull them off successfully. Use the table of contents if there’s a particular method you’re interested in.

This is probably the most common way of professionally and accurately checking the hardness of metals. A rounded steel ball or conical diamond tip is pushed into the metal, and the depth of the indent is measured by the machine.

The machine uses a minor load and a major load to make sure that the reading is accurate. You preset the minor load and the part will properly seat between the penetrator and the anvil. Then you push the button or pull the lever (depending on the machine) and the tester will apply the major load. The machine will read the difference in distance between the loads and give an accurate reading.

Overall, this is generally the gold standard for anyone wanting to check a metal’s hardness. It’s quick and easy once you know how to use the machine.

It’s most commonly used to check the hardness of steel that’s been heat treated. Here’s the process:

How to Use a Rockwell Testing Machine

Once you’ve done it once or twice, you’ll realize that this is a ver easy measurement as long as you have a nice, stable setup.

Since the Rockwell test needs to make an indent in the test piece, there’s a minimum thickness associated with the test. If the material is too thin, you’ll be measuring the hardness of the supporting anvil more so than the test piece.

Here’s a little chart on the minimum material thicknesses for the Rockwell scale, based on hardness:

So what does this mean? You can’t use the Rockwell method for testing the hardness of .020″ shim stock if it’s supposed to be 60 HRC. Just be aware that there are minimum thicknesses in the 0.040″ and under range so you can look up the reference if you should ever need to.

You might have heard about this in school, that you can get a ball bearing, whack it with a hammer on a piece of metal with a known hardness, then whack it on the piece of metal in question, compare the diameters of the indents, and work out the hardness of the metal from the results.

In reality, the people that can pull this off successfully are a dying breed. And by dying breed, I mean I’ve yet to meet one that’s still alive.

There are just way too many variables to doing this by hand. Hitting something with a hammer with the exact same force twice in a row is an art of legend in and of itself.

A more modern way of doing this is with a machine that loads up the indenter with a controlled force. Then an operator uses a special microscope to inspect the diameter.

Even still, the accuracy of this method generally has mixed reviews. It’s pretty rare to find one of these machines (aside from at casting facilities) simply because there are typically better ways of checking hardness.

To be fair, there are machines that will automatically work out the size of the indent without an operator microscope. However, they do this based on the measured depth of the indenter. That’s the process that Rockwell uses. Why not just use a Rockwell machine?

The bottom line is that, aside from non-homogenous material applications (like castings), you just won’t have much of a reason to choose this method.

This is really interesting. The most common microhardness are Vickers and Knoop. In real life, I’ve come across Vickers far more often.

I’ll focus on Vickers, since that’s the one I’m more familiar with.

The concept is almost like a hybrid of the Rockwell and the Brinell test. A pyramid-shaped indenter is pushed into the workpiece with a small amount of force (under 2 pounds) and then the indent is measured diagonally.

The squarish indent is much crisper and easier to measure that the circular Brinell indent, but it’s also much smaller. A good microscope is required.

Even still, the Vickers method is becoming increasingly popular due to its accuracy and versatility, despite being time consuming. It’s unlikely that you’ll see these very often in your average machine shop, but they’re becoming a staple in specialized facilities, like turbine manufacture and repair shops and medical production plants.

Here are few quick notes about the Knoop test. In principle, it’s very similar to Vickers, with the following exceptions:

Ok, so those are the “professional grade” tests that are lab-worthy (although Rockwell is the most common for machine shops). Now let’s get into some really affordable, easy solutions that are often good enough and have some really noteworthy advantages.

When I first saw this thing, I thought it was the most ridiculous idea ever. Then I tried it a few times and realized it really isn’t half bad. It’s meant to be a highly portable hardness check.

To be clear: this is not a method I’d really rely on for critical parts. That said, it’s super straightforward and just a good tool to have for reference.

Actually, and one repair shop where I worked, all the salespeople were given one of these testers. That way when they were looking at a repair job, they could quickly find out it the piece was hard or not so they could set customer expectation properly off the bat.

Ok, so there are two variations to this test: the old-school way and the handy, more modern pocket (Leeb) version. To be honest, neither are all that popular today, but they’re nifty and good to be aware of.

The old-school method was a proper little machine. A magnet would hold a diamond-tipped weight, called the hammer, and the machine would display the rebound height of the hammer once it was dropped from a fixed location.

The harder the material, the higher the rebound.

Overall, it’s not terribly accurate, but it’s a decent way of getting a ballpark idea. The machine was invented in 1907 but it never took off as much as the Rockwell method (for obvious reasons). In 1975 the process was improved by the invention of the Leeb test

Ok, it’s not so likely that you’ll see the old-school units still in use today, but you might see the more modern “pocket reference” units that actually do more or less work.

To be honest, most of these units are actually designed for other materials like concrete (called resiliometers), but there are a few out there for metal, like this one. They’re really not very cheap (the most economical I’ve found are around $400 and the nicer ones can get close to $1k) but it’s a lot less expensive than dropping $2,500 for a Rockwell machine, and it’s significantly more portable.

I’ve also seen guys that have a super simple mechanical one that’s basically a tube with a scale and a magnetically released ball bearing. They’re pretty similarly priced, though. Usually over $250. For the one that I’ve used, I was able to get readings within about +/- 3-5 HRC.

This is the classic, easy way that bladesmiths use to check if their heat treating worked. The concept itself is really simple:

If a cutting tool is harder than the material, it’ll cut. If it’s softer, it won’t.

So if you scrap a file against a piece of metal, it’ll dig in if the metal is softer than the file, and it will skate across the workpiece if it’s harder. It really doesn’t take any skill or “feel” to get this right – it’s extremely obvious when the file is biting in.

So that’s a good standard yes/no check to see if the steel is around 60 HRC or not. It’ll cost you nothing that you don’t already have, and it just plain works.

But what if you need to check something that’s supposed to be 50 HRC? or 40 HRC? Most guys think you need a Rockwell tester for this. Here’s a tool set that’s under $100 that will make your life very easy:

You can buy file kits that will test different hardnesses. The files are heat treated in 5 HRC increments, so you can start with the hardest file and work down until you get to one that skates instead of bites.

I have one of these in my toolbox, and I literally use it all the time. It’s not super accurate since you can only check increments of 5 HRC, but it works exactly as intended and it’s a great way of getting in the ballpark. And, for the record, I have checked it against a Rockwell machine and I’ve yet to be wrong with it.

I bought mine off Amazon. Here’s the link so you can check it out for yourself. If you work with hardened steel, it’s really useful to have in your toolbox. It’s also great for large or non-prismatic (wierd-shaped) parts that won’t fit in the Rockwell machine.

Overall, you can probably guess which are my preferred testing methods are: Rockwell for accurate testing and file kits for quick, mobile ballpark checks. Of course, there will always be circumstances where another kind of test will be more appropriate, but with those two at your disposal you’ll be well equipped to handle the large majority of jobs that come up.