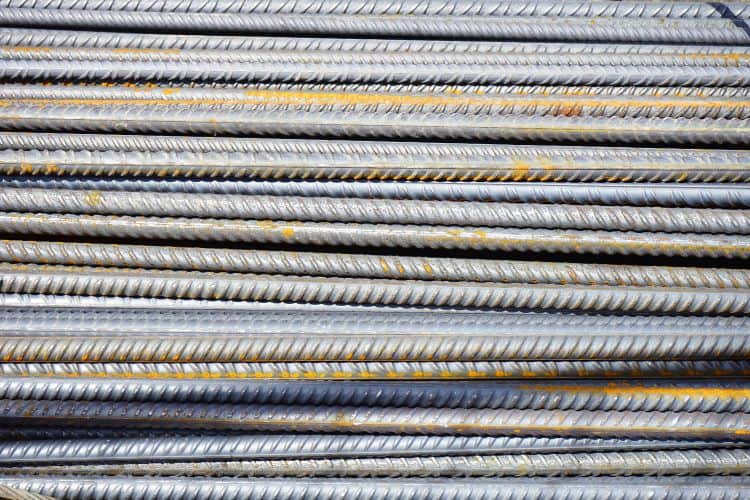 I really like using rebar for making all kinds of industrial-looking welding projects. It’s also useful for things like reinforcing concrete, surprisingly.

There are also a lot of different tools and methods that you can use to cut rebar effectively. Here are a few examples:

Just about anything has pros and cons, and I’ll explain all of that in this post.

If there’s any possible way to avoid this, I will go to great lengths to avoid this suffering. Hack saws work if there’s no other available solution.

The reason that I really despise using a hack saw is that it’s exhausting and the results are usually not great. I’m no etymologist, but I’m fairly sure that this tool is what spawned the term “hack job”.

Another reason that this can be a painful tool to use is that rebar can have hard spots. It’s made from recycled steels from things like junked cars, and the metallurgical consistency is something along the lines of your wife’s experimental trifle; some of it’s dead soft, some of it’s rock hard.

Basically, you can get halfway through the bar like butter, and then you run into a hard spot that instantly dulls all the teeth of your blade.

So really, this will work in a pinch, but if I have to make any more than 3 cuts in smaller diameter rebar I’m definitely going to avoid this “solution”.

If you’re dead set on using this tool, you can greatly ease your suffering by making sure that you’re using a proper hand saw technique. Use long strokes that engage as much as the blade as possible. It’s also ideal if you can firmly clamp the rebar and grip the hack saw firmly with both hands.

Also called by the trade name “Sawzall”, a recip saw is a mild step above a hack saw. Since it’s a power tool, it can cut the rebar a fair bit faster, however this is still a pretty unwieldy tool for most people.

Even still, it works well enough if you only need to make a few cuts and this is what you have available. It also has the advantage of being a power tool that can reach in some pretty cramped areas, although it generally won’t do a good job of cutting rebar flush with concrete if it’s already buried.

Also, this tool produces a ton of vibration, so it’s really unpleasant to use for a larger number of cuts.

If this is what you plan on using, make sure that you have an appropriate blade installed. You need a blade that’s intended for metal (bi-metal blades generally work well enough) and it needs to have fine teeth. Usually you’ll want at least 12 TPI (Teeth Per Inch), although I prefer to work with 18 to 22.

The higher the TPI, the finer the teeth.

You also want to make sure that the bar is held firmly. Recip saws tend to catch and smack things around if they’re not secure.

Now we’re getting into the tools that actually work quite well for cutting bar steel. You can get battery-operated handheld band saws at almost any hardware store, and they’re also frequently available for rental.

They’re easy to use, they make clean cuts, there are no sparks, and they’re highly portable. What’s not to like?

The only real disadvantage to them is that they’re a bit bulky for use in tight areas. This is no problem whatsoever if you’re just cutting bars to length before placing them, but if you’re trying to trim things already in place then you might have a hard time accessing the bar.

You also don’t want to cut too close to concrete with a band saw; the blade works well on steel but gets destroyed when it touches concrete. The occasional hard spots in rebar can put some extra wear and tear on the blade, but generally they do well.

Overall, though, these are a good option for cutting steel bars of nearly any kind. If you want a good quality one that isn’t terribly expensive, check out this one on Amazon.

For things like welding projects, I actually really like this option. It’s limited to smaller diameter rebar, though.

The reason I like this option is that it doesn’t really put any wear and tear on the tool, and there are no consumables to pay for. So basically, If you don’t mind the physical exertion, the cuts themselves don’t really cost you any money. Inlike other things like blades, where you’re always needing to buy new ones once they’re worn out.

If you want to make cuts in small diameter bar, like what you typically get in residential construction, then this is a good option.

There are a couple of downsides, though. They can be a bit unweildy, and lots of repeated cuts will probably tire you out quite a bit. You also don’t get a clean, smooth cut, instead they’re sharp and need to be cleaned up if you’re going to weld them or have them exposed in some way.

This one is my go-to for most projects. It’s easy and versatile. You can cut rebar flush with concrete if it sticks out at all. It’s also easy to cut any kind of angle you need.

One of the “downsides” to this tool is that it throws sparks. Just make sure that you use gloves, wear a long-sleeved shirt, and that you don’t have open vats of gasoline around.

Also, you’ll need to make sure that you’re using the right kind of disk for the job. Get a cutoff disk for metal like these ones (Amazon) and it’ll work great. If you want to remove the sharp edges, I’d also highly recommend getting a flap disk to smooth out the cut.

If you’re doing a lot of cuts, it might actually be more economical to upgrade to a diamond disk like this one. They can last for a REALLY long time as long as you take care of them.

These are a really quick way to cut through rebar, but they have some definite disadvantages.

Basically, since chop saws are essentially a stationary bench tool, you’ll need to bring the rebar to the tool instead of the tool to the chop saw. On full length rebar, this can be pretty exhausting. It’s much easier to carry a smaller tool in your hand than to drag around 20 foot lengths of steel.

But if you have a bench to work from and the space, this can still get the job done.

Ok, if you’re doing actual rebar for construction, this is the proper professional tool for the job. It’s extremely easy to work with, can cut even heavy rebar in just a couple seconds.

This is also generally considered a safer tool to use than anything that uses grinding technology; there’s no sparks, no rotating parts that can shatter and harm you, and ultimately fewer moving parts.

Here’s a short video that shows how this tool is used:

One other disadvantage of this tool is that it is heavy, and you’re tethered to the hydraulic unit. In other words, you’ve got limited mobility.

The actual units themselves are really expensive though; you’ll spend several thousand dollars if you want to buy one outright. If you want to try out this equipment in the shorter term, you’re usually best off looking into a rental.

link to What Kind of Metal is Rebar and What Can I Use it For?

You'll hardly find a scrap metal more common than rebar. From spindly little rods to beefy cylinders, it's accessible and dirt cheap. So what kind of metal is rebar? Usually standard rebar is...