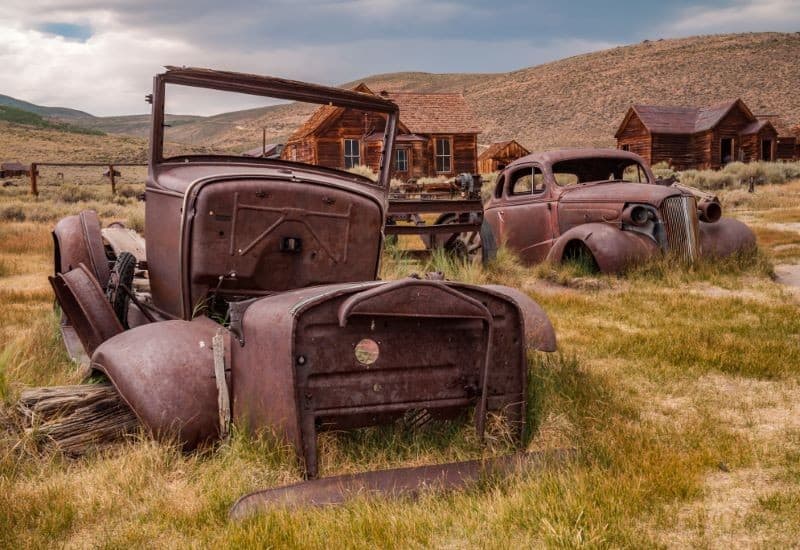 It’s pretty rare for rust to ever be considered a good thing. It’s an absolute pain to restore anything that’s begun to degrade and rot away with rust. The cost of restoration can be pretty insane, too.

So why does metal rust? Any metal that contains iron, when exposed to oxygen in the presence of water, will begin to rust. These same kinds of metal will also rust when exposed to chloride and water. Chloride is most commonly found in salt.

In this post, I’ll get into some of the science that makes this happen, what metals don’t rust, and how you can prevent metals from rusting.

Rusting is an electrochemical process that reduces iron-containing metals into their natural, unrefined states. This process can be accelerated by adding heat, certain minerals, and chemicals.

Think of it as a natural way of putting our junk back in the ground.

Rust is a type of oxidation. Oxidation is a fancy word that describes a loss of an electron by a reaction with a molecule, atom, or ion.

Iron and oxygen have opposite charges, so they’re attracted to each other (kind of like magnets). When they contact each other in the presence of water, they combine. The iron atom loses three electrons and the oxygen atom gains two atoms. This is that loss of an electron that we talked about. Iron is just too giving.

This forms the molecule Fe2O3, which is scientifically known as ferric oxide. The rest of us just use the nice and easy word “rust”.

Oxidation doesn’t necessarily mean that oxygen is the culprit, although that’s where the term originated from. Way back in the time of dinosaurs (or thereabouts) oxygen was the only known oxidizer. The modern definition of “oxidation” can include other oxidizers, like hydrogen peroxide and halogens.

Not all rust is formed by oxygen. There’s also the type of rust that’s made from chloride.

A common source of chloride is salt. Actually, the fancy name for salt is sodium chloride. An ion from chloride will react very strongly with iron when water is around. If there’s no oxygen present, this ion alone will cause a green rust to form, like what you see on sunken ships.

This is why metal will rust so quickly around the ocean. The salty, humid air will noticeably speed up this process. You might even notice rust forming on bare metal within a single day!

Another common place to see salt wreaking havoc on metal is in cold areas where salt is used as a de-icer for roads. Usually the cars will rust and rot away significantly faster if the metal isn’t treated and the salt promptly washed off.

There are actually several kinds of iron oxide (rust) other than the simple red stuff from oxygen and green stuff from chloride, but it’s pretty rare to see them on an average day.

How to Protect Metal From Rust

There are loads of ways to prevent rust from forming on metals containing iron. Pretty well all of these methods consist of forming a barrier that will prevent the iron and oxygen from contacting.

This is the most common and usually the cheapest solution. If you cover steel with a coat of paint, you’re creating a simple and easy barrier to block the oxygen molecules.

For this to work properly, you’ll need a kind of paint that will adhere strongly to the metal. If it chips or peels, it won’t protect the metal any more. There are specially designed paints for metal, as well as plastic powder coatings and enamel that will all do essentially the same thing.

This is a process where you cover the iron or steel with another kind of metal that doesn’t rust. This can be done electrochemically or by vapor deposition.

Another common way to apply metal is by dipping it, like with galvanizing. Hot galvanizing is a process where steel is dipped into a bath of molten zinc, which protects the metal from rust.

Essentially, you’re using another kind of metal to create that barrier between the iron and the oxygen or chloride.

However, for some plating metals (like zinc), you’re also using the metal to absorb that extra electron that causes rust. Eventually the zinc will corrode away, but until it’s gone, the steel underneath will rust at a much slower rate. This process is called cathodic protection.

Beyond those listed above, there are a few other options that could be used. However, these are usually temporary solutions, like for shipping by boat, or they require regular maintenance.

For example, many small metal components are dipped in wax when they’ll be exposed to salt air during shipping. Larger pieces of metal might use a spray-on wax.

Many machine components are sprayed with oil or coated in grease. Since oil repels water, this is a great way to prevent rusting. The downside of this is that the oil needs to stay on the metal. If it’s cleaned off and not reapplied, then the metal will rust. This means that the machine will need regular maintenance.

For metal components that can’t be painted or coated, sometimes the solution is to use a metal alloy instead of regular steel.

Stainless steel prevents rust because it’s alloyed with other metals and elements that will oxidize and form a thin barrier that prevents rusting. There are several different kinds of stainless steels, most of which will rust to some extent, since they do contain iron. But the thin oxide layer formed by these alloying elements will prevent the rust from getting very far.

Common examples of alloying elements for stainless steels include chromium (the most common element in this metal that prevents corrosion), as well as nickel and molybdenum.

Stainless steels with less chromium will be more likely to rust, whereas high chromium content will dramatically improve the corrosion resistance. This is the #1 element added to make stainless… stain less.

This is usually a total pain. If you’re trying to restore something that’s rusted, though, you do have a few options based on how deep the rust goes.

Anyway, that’s the basic answer on why metals rust. If you’re wanting to learn more about metals that don’t contain iron and oxidize in a different way, here’s the article to check out:

Do Titanium, Aluminum, and Other Nonferrous Metals Rust?

Or, if you want to learn more about steel, this might be more interesting to you: