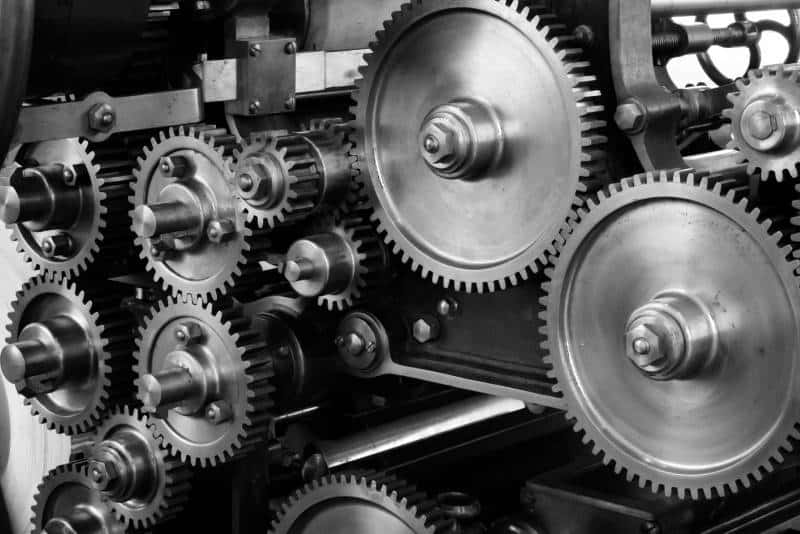 There are approximately 36 million different kinds of steel.

You can probably imagine where I pulled that number from. (Hint: from somewhere behind me) But you get the idea.

At first glance, all the different kinds of metals can seem pretty overwhelming.

So what’s the difference between carbon steel and alloy steel?

Carbon steel is iron with carbon added, whereas alloy steel also includes other elements to modify the properties of the metal.

That’s not to say that carbon steel is pure carbon and iron. Everything will have impurities. But these extra elements don’t make up a major part of the ingredient list. At least, they aren’t present enough to really change the carbon steel much.

Even within these two categories of steel, there are huge variations. Let’s take a look at what these are, what properties these metals have, and what applications they’re used for.

Aside from iron, the main element of this steel is carbon. You probably already figured that much out.

This is cheap stuff.

It’s the most common type of steel you’ll find in applications that don’t have any particular requirements, like high strength or wear resistance.

This is a common steel for hobbyists to use. You’ll find it in simple mechanical systems.

It’s very weldable and machinable. In general, really easy to work with.

The only way to increase its hardness through heat treating is by case hardening. This is a process that adds carbon to the surface, which makes for a hard outer layer and soft core.

This is a stronger steel with good wear resistance, but it’s a bit trickier to form, weld, and cut.

Medium carbon steels can be heat treated and tempered.

This is getting into the pretty specialized stuff. Usually this is only used when you really need it, since it’s not easy to work with.

It’s really strong. This is a common steel to use for springs and wires, since it takes a lot of compression to get plastic deformation (when the metal doesn’t just spring back).

Knifemakers love this steel too.

A popular one for large knives is 1075 (0.75% carbon). It’s soft enough that it won’t snap in half when you chop with it, but it will still hold a good edge.

At the high end of the spectrum, you have 1095 steel (0.95% carbon). It holds a really good edge, but it’s also easy to snap. That means that it’s good for smaller knives that won’t do any heavy chopping.

Very heat treatable, but hard to machine and weld. You’ll generally need to anneal it before you can cut it mechanically, unless you have some expensive, specialized equipment and tools.

It’s not too likely that you’ll run into this very often. Carbon content is 0.96%-2.1%. Super hard, super brittle. Think glass.

Really hard to work with, so it’s pretty much only for specialized applications.

This is really where it gets fun.

There are generally two categories of alloy steel: low alloy and high alloy.

Anything with less than an 8% alloying element is labelled as low alloy, anything over 8% is high alloy.

Low alloy steels are by far the most common.

For example, you can change the strength, hardness, and corrosion resistance by tweaking these alloying elements.

Let’s go over what some of the common alloying elements are, and what effect they have on the metal.

Technically you’ll see this in noticeable quantities in carbon steel, but higher quantities with alloy steel.

The primary reason for adding this is to fine-tune the heat treating requirements.

Normally, steel will need a fast quench from a high temperature to a very low temperature in order to harden.

The tricky thing is that the faster the quench, the more of a risk there is of cracking.

Manganese allows for a slower cooling rate. Instead of quenching in water, for example, you can quench in warm oil. With some specialized steels, you can even quench with room-temperature air.

All you need to do is heat it up enough, then an air cool will harden it up to 63 Rc. It’s highly recommended that you temper that back a bit to stabilize the steel and reduce the risk of cracking, but either way, it gets really hard.

When you have over 11% chromium, you can get stainless steel. This dramatically increases corrosion resistance.

It also dramatically affects the metal’s other properties like strength, hardness, and heat treatment.

Here are some examples of where you’ll see lots of chromium:

309 stainless has 23% chromium and is designed for corrosion resistance at high temperatures.

D2 is actually a tool steel. This is an interesting one because it has 11%-13% chromium, but it’s only considered “semi-stainless”.

D2 steel will rust more than regular stainless (like the very common 304), but not as much as regular carbon steels.

It uses a combination of cobalt and chromium to achieve really high wear resistance.

Since it’s such a mouthful, a lot of people just call this “moly” (sounds like molly).

This can also increase corrosion resistance to a point. It works along with manganese to reduce the required quench rate.

For example, that A4 tool steel that I mentioned before has both molybdenum and manganese. It has about half the amount of molybdenum, between 0.9%-1.4%.

This also really increases the toughness and tensile strength of steel. You’ll see it in some heavy load applications.

Maybe one of the most common places you’ll see steel with moly is 4140 steel. It has a combination of chromium and molybdenum. Lots of people refer to this as “chromoly” steel.

You’ll see 4140 all over in industrial applications. Heavy gears, large shafts, this is the workhorse of the steel world.

This really comes into play with heat treating – it helps control the grain size of the metal.

Here’s a crash course on heat treating so you can understand this:

When you heat treat steel, you’re essentially trying to reduce the grain size of the metal.

If you look at it under a microscope, you’ll see little cells of metal that are all crammed in tight. With soft metals, these “grains” are large.

When you heat treat the metal, it changes the crystalline structure and makes the grain small and even.

Vanadium helps keep that grain small and even when you heat treat it. It forms carbides that restrict the grain from becoming too large.

Basically, it gets harder and stronger.

You’ll see this a lot in tool steels like O1 and D2.

You’ll see this in stainless steels. One particular application is with austenitic stainless, which is the most common kind of stainless (like 304)

When chromium is 18% or more, and nickel is +8%, you get austenitic stainless.

This really boosts the corrosion resistance (rustproofery) and increases the toughness and impact strength.

Basically, it won’t rust and when you bang on it with a hammer, it’ll mushroom a bit instead of crack in two pieces.

Ok, so now you’ve been all ejjicated and can sound smart in front of your friends.

Really all you need to know is this:

The rest was just bonus.

If you’re the kind of guy that likes to print things out to tape to your toolbox, this one’s on me: