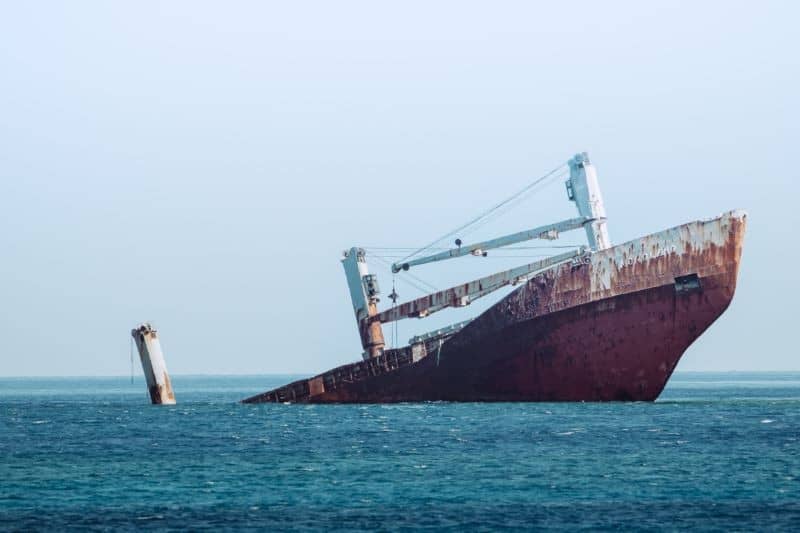 While sometimes a bit of rust can make a project look kinda interesting and sell well at county fairs, it’s generally something entirely undesirable. Some materials, however, don’t rust.

Do titanium and aluminum rust? No, they don’t rust. Only metals containing iron will rust. However, both of these materials will oxidize and can corrode. This is different from rusting, since it won’t quickly turn the metal into brown and red flakes. Instead, oxidizing can actually create a protective barrier.

In this post, I’ll get into what exactly these terms mean, as well as the pros and cons of oxidation and corrosion.

To start off, let’s get a good understanding of what rust actually is. Remember, titanium and aluminum do not rust. Here’s why:

Rust is iron oxide (found in high quantities in non-stainless steels), which is a kind of unique substance. As iron rusts by contact with water or salt, it flakes and becomes porous. This allows more water or salt to contact the bare iron.

It’s essentially a continually destructive process. The more rust there is, the more it absorbs water and holds on to salt.

That’s why lots of old cars or ships will have entire areas that will crumble from rust. Once the rust takes to the metal, it’ll continually eat away at it until there is no metal left.

How is Aluminum and Titanium Oxide Different?

Instead of getting flaky and crumbly, aluminum and titanium oxide create a tough barrier that prevents further oxidation.

Basically, a thin layer will form on the surface of the metal. This barrier it tight, hard and strongly bonded to the base metal. I because of this, it’s a great protection against further oxidizing.

That said, there are a few differences between aluminum and titanium oxide.

Titanium has a love affair with oxygen (technical term: affinity for oxygen). Which means that it sucks it up immediately, whether it’s in air, water, or some other substance. It also reacts immediately.

Thing is, titanium oxide does not have this same affinity. This means that once that hard, thin barrier is formed, the oxidation stops. It doesn’t eat away at the metal like rust eats iron.

This barrier really is super thin. It’s usually somewhere between 1.5 and 10 nanometers thick. To put that into perspective, a sheet of paper is usually 100,000 nanometers thick. So this insanely thin but strong layer doesn’t really affect the mechanical dimensions of anything made from titanium.

So what happens if you scratch this oxide layer?

A new one forms instantly. In fact, the only way to really break down titanium is to put it in an abrasive or caustic (like super acidic) environment that will constantly break down that layer as it forms.

This is actually why it’s really hard to etch titanium at home. This instant oxide layer will prevent the chemical or electrochemical reaction from happening.

Alternatively, titanium could break down even faster if it’s in an environment that’s absent of oxygen. That’s not very common by conventional means, at least on Earth. But it would prevent the oxide layer from forming.

This is why titanium is super durable; it’s insanely corrosion resistant. The only side effect of this oxide layer is that it’s a difficult material to polish to a bright, mirrorlike finish; the color of the oxide layer is dull gray.

Aluminum oxide is a bit different from titanium oxide. It’s not quite as tough, and it doesn’t form by instant contact with oxygen.

Actually, the most common way that you can get a uniform oxide layer on aluminum is by anodizing. It’s an extremely common process for aluminum products, and it also has the added benefit that you can dye the metal different colors.

Aluminum oxide also forms by contact with salt. This is why aluminum will need some maintenance in marine applications. The oxide layer is much thicker, and can turn white and powdery over time in particularly oxidizing environments (like the ocean). A typical oxide layer after anodizing can be as thick as an average piece of printer paper.

In general, though, anodized aluminum is pretty stable stuff. That’s why it’s a popular choice for things like flashlights and automotive rims.

Aluminum oxide can stain, though. It’s porous (which is why it accepts dye so well) and it can also absorb other undesirable things.

If this happens, there are a few good cleaning products out there that can help you to restore the aluminum fairly easily. Here’s an example of a product that works great for restoring oxidized aluminum.

So, essentially, yeah aluminum will corrode. But it’s waaaay easier to restore than steel or iron. You won’t get a pile of rust flakes. Generally speaking, it’s just a matter of giving it a scrub with a suitable solution and you’re good to go.

Honestly, this is going to get pretty boring if I list every nonferrous metal out there along with its oxidizing properties in detail. They’re all, for the most part, something along the same lines as aluminum or titanium.

For the sake of reference, though, here’s a quick overview that will help you decide if a material is good for your application:

This will form a blueish-green oxide layer that’s commonly known as patina. It commonly happens with contact with air, water, and salt. Like aluminum, the patina will adhere well to the base metal and significantly slow further corrosion. Copper can, in normal environments, last for centuries.

Fun Fact: The statue of liberty is made of copper, and the patina is what gives it its color.

Not-So-Fun Fact: This patina is poisonous when it’s on cookware. If you have copper pots or pans, make sure that they’re always scrubbed bright and that there isn’t this greenish blue patina when you’re cooking.

This is a metal that’s primarily made up of copper, with a bit of zinc and tin. For all intents and purposes, you can expect that the patina is going to essentially be the same as it is with regular copper.

Brass is pretty similar to bronze, with the exception of a much higher zinc content. Again, the patina is basically the same deal as with copper.

This is actually a common coating to apply to steel to make it corrosion resistant. It’s what they use for galvanizing, although there are a few other ways of applying it, too.

Zinc oxidizes in a similar way to titanium, but it’s not as strong and not as fast-acting with oxygen. It’s softer and easier to break off or scratch. In other words, zinc might not perform the best in some climates and environments, such as tropical or marine. For average use, though, it works great.

What’s the difference between oxidation and corrosion?

What’s the difference between oxidation and rust?

Rust is specifically a synonym of iron oxide. Therefore, rusting is a form of oxidation. However, metals that don’t contain iron can’t form iron oxide. That means that there’s no rust on metals like aluminum, titanium, copper, and zinc even though they may be oxidized.

If you’re wanting to do something to really protect the metal you’re using, generally your options are painting, PVD or CVD coatings ($$$ for small batches), powder coating (can be done at home) and anodizing (also can be done at home).

If you want to give aluminum anodizing a go, take a look at my beginner’s guide.