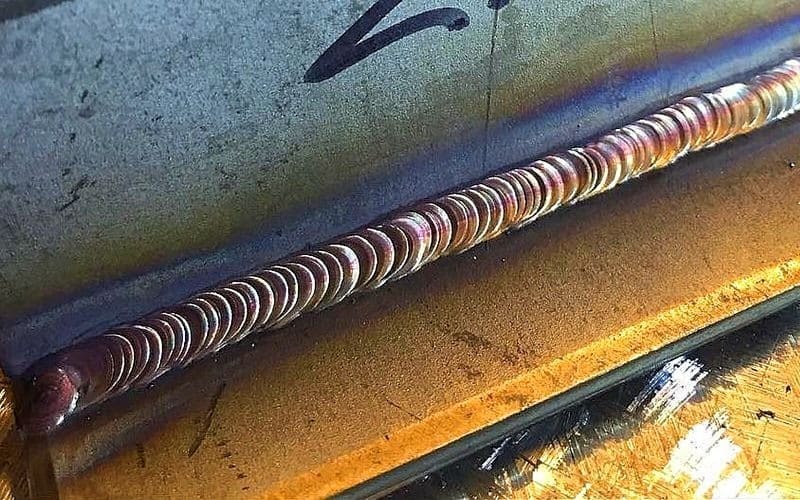 If you’re a machinist like me, you’re probably always trying to make those beautiful blue 6’s and 9’s for chips when you’re cutting steel. If you’re a welder, that color spectrum following your bead is an everyday sight. If you accidentally dropped your knife in the campfire, you’re probably wondering if the blue means that you just wrecked your knife.

Actually, steel can turn several different colors depending on the thickness of the oxide layer. The color of steel is a great way to work out how hot the metal has been. In this post, I’ll clarify a bit on how this thin film effect works, how it’s formed, and why this is so useful with steel to a trained eye.

How Light and Color Work

Actually, light is a pretty complicated thing, and it reacts with different objects to produce color in different ways. That’s why, in this post, I’ll simplify it to how it works in respect to the color of metal.

Each color is just light with a different wavelength. For example, what we see as red is simply a light wave with a wavelength of 700 nanometers, violet is 400 nanometers, etc.

Regular light, like what we get from the sun or a “white” light bulb, is known simply as “white light”. White light contains every color (and consequently every light wavelength), but since they’re all included evenly, one isn’t more distinguishable than another. That’s why it looks white to us.

So basically, white is every color packed into one. It’s not brown like when you melt all your crayons together. Crayola is just messing with your head.

To perceive color, we need to either reduce or boost some of those wavelengths.

This is the phenomenon that makes the metal change color. When you have a thin film of something, the light bouncing off the upper and lower boundary of that film will behave differently.

If the film is a multiple of one half of a particular color’s wavelength, the result is an amplification.

Here’s an example of how this works:

Let’s say we want something to turn blue. The wavelength of blue is around 470 nanometers. This means that if the film is 235 nanometers thick, it’ll enhance this wavelength and make the surface look more blue.

If the film is 3/4 of the wavelength of blue, or about 350 nanometers thick, it will interfere with the wavelength and remove the color blue from the surface.

Ok, it’s actually a little more complicated than that, and those numbers aren’t 100% correct, but it’s close enough to get the main point across. Light physics is never really all that straightforward.

How Light Works on Metal

If the steel has a “normal”, unoxidized finish and no type of thin film, it’s reflecting all the light in the spectrum. It doesn’t look white simply because it’s not reflecting enough light. As you reflect less light, the closer to black you get. Complete black is the complete absence of light.

So what makes it change color?

The thickness of this layer is what controls which light waves are blocked. The thickness of the oxide layer is dependent on the temperature that the steel hits while in contact with oxygen. It’s also affected slightly by the amount of carbon in the steel.

In other words, heat will initiate a chemical reaction between the iron in the steel and the oxygen in the air. This forms an oxide layer, which is a thin film that will filter out some wavelengths while enhancing others, depending on its thickness. This is how the color changes.

Actually, steel isn’t the only metal that turns blue, and it’s not just iron oxide that can pull off this interesting feat. Another example of a metal that turns blue (and other colors) with heat is titanium. The titanium oxide can have the same result, although it will take different temperatures to achieve it.

Why Steel Coloring is So Useful

According to some, steel coloring was the first useful application of the thin film effect. The reason for this is that it allows us to know how hot a piece of steel has become while exposed to the oxygen that’s normally in air.

The hotter the steel gets, the thicker this oxide layer becomes. This means that different wavelengths of light are either muted or amplified, thereby changing the color of the steel.

In fact, this is one of the most common ways that people will control their tempering when they’re heat treating steel. When a piece of medium or high carbon steel is heated up until it’s bright red/orange and then quenched rapidly in oil or water, it will become extremely hard, but also very brittle.

By allowing the metal to “soak” at a lower temperature after cooling, the steel will become tougher and less brittle. It will also become slightly less hard. We can use the color of the steel to determine when it’s reached the desired temperature for this tempering process.

Machinists will also use this color indication of heat to determine when cutting conditions are ideal for machining steel. Blue chips mean that the heat is being absorbed and removed by the chips, instead of the workpiece or cutting tool.

Here’s a downloadable list of the different colors that steel will change to depending on temperature:

Now, different grades of steel will have different oxide layer thicknesses at different temperatures. That list is based on tool steels, which have a medium carbon content.

Ultimately, the thin film effect is extremely useful for anyone that’s working with steel. It allows us to identify the temperature of the metal by eye, and thereby control the properties of the metal or provide insights on the process that we’re carrying out.