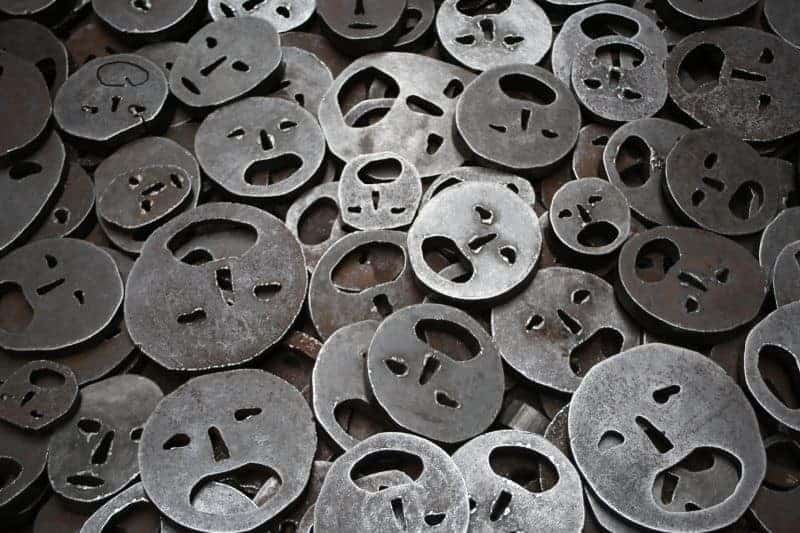 One of the downsides of cutting metal with heat is the heat affected zone. Sometimes this doesn’t affect the project at all; other times it’s a complete deal breaker.

In this post, let’s go over how to do this properly, and how to decide on an effective way to get the results you’re after.

What Is a Heat Affected Zone?

The short answer is that a heat affected zone is an area where the metal’s metallurgy is changed like it would be through heat treating. Since the HAZ is localized, though, you’ll just get a hard area only around the flame cut edges.

This is an area that’s usually partially visible. If you’re cutting steel, you might see blueing around the cut areas. It’s similar to what you get when welding.

Basically, the HAZ is just the area that gets hot enough to affect the metal’s properties. Generally you only need the metal to get up to a few hundred degrees to do this.

The HAZ results in things like carbide precipitation and intermetallic phase formation. That’s a sciency way of saying that it could potentially mess you up.

What Metals Have a Heat Affected Zone?

One basic rule of thumb here is that if the material can be changed by heat, it will be affected by a HAZ. Oxyfuel cutting is one of the processes that will introduce the largest and most noticeable HAZ, so you need to be especially careful in determining if the application will allow for it.

Disadvantages of a Heat Affected Zone

Here are a few things that can happen in the HAZ:

Generally speaking, the HAZ is a very common failure point of components that are under stress. It’s an easy place for cracks to form and propagate. It’s also something that can affect forming and bending operations.

You can also expect that the temper of the metal will be completely changed. This can be particularly problematic in metals like aluminum, with high thermal conductivity and a sensitivity to tempering.

At the end of the day, though, there are three main aspects of the HAZ that could pose a major problem: corrosion resistance, hard spots, and potential cracking.

For stainless steel especially, you’ll need to consider whether you can live with reduced corrosion resistance. Parts with raw, flame-cut edges really won’t take long to corrode, and it will be extremely visible.

Structural components that are under significant strain should also be analyzed carefully. If you’re maxing out the performance of a component, then it’s very possible that you’ll have problems with a HAZ.

How Large is the Heat Affected Zone from Flame Cutting?

Again, this really depends. There are a few factors that come into play when determining the amount of area that is likely to be affected by heat.

The #1 factor is the speed of the cut. If you’re able to move the torch quickly, less heat will be absorbed by the metal. A slow cut will get really hot.

Another factor is the amount of heat that the torch is able to produce. You might think that a hotter torch means a bigger HAZ, but the reverse is actually true.

That’s because you’re able to move a hotter torch faster than a weaker torch. Essentially what happens is that the more powerful heat is more focused and localized, resulting in a smaller HAZ.

Cutting by hand will always introduce more heat into the metal than a machine-controlled torch will. A torch bed will allow for much more stable and controlled cutting conditions, which makes it much easier to reduce the HAZ.

Another factor is the kind of material you’re cutting. Aluminum transfers heat much more quickly that steel, which means that aluminum will have a comparatively larger HAZ.

Since the size of the HAZ depends on several factors, it can be tricky to give a straight rule of thumb for working it out. The best I can do is provide some scenarios.

For example, if I need to machine a 6″ cube out of a heat-treatable steel that’s flame cut, I’ll cut the block with an extra 1/2″ per side so that I can remove the HAZ.

For something smaller, like 1/4″ plate, I’d likely leave about 3/16″ excess material per side. This would allow me to really get rid of that heat affected zone.

On the other hand, the HAZ might be totally fine as-is. If it ain’t broke…

How to Reduce the Heat Affected Zone Through Heat Treating

The heat affected zone is basically an area that has a different heat treatment than the rest of the base material. This completely changes properties like hardness, tensile strength, etc.

HAZs can definitely be reduced by heat treating. First, normalize or anneal the material. Many people like to normalize more than once so it’s thorough. From there, you can re-do any heat treatment that’s required to get the properties you’re looking for.

This isn’t a perfect solution, mind you. This will not completely clean up the area that’s been incinerated but the oxyfuel cutting process. Some of the carbon might be burnt off around the extremities.

Another down side of this process is that it can be expensive and slow. If you’re just doing a repair job, then this might not be a bit deal. But if you have a lot of parts to process, or if you’re limited by not having a torch/furnace that’s big enough, then this might be a no-go.

If you need the surface clean and homogenous, then you’ll probably want to do some grinding to clean everything up. Overall, though, normalizing and heat treating can be a great way to reduce the effect of the HAZ.

How to Remove the Heat Affected Zone Through Cutting

This is usually the easiest and cheapest way to deal with a Heat Affected Zone that has to go.

You can grind it away, but this can be slow going and there’s a risk of just introducing more heat into the part if you don’t do it properly.

My preferred route is machining. Here are a couple tips to keep the job from going sideways:

Overall, flame cutting is one of the worst ways of cutting in terms of massive HAZs. If this is a major concern, look into other processes like plasma, laser, or waterjet cutting.

If you’re interested in looking into different methods of cutting metal in a similar way, you might want to check out this article: Flame Cutting VS Plasma: Which System Should I Get?