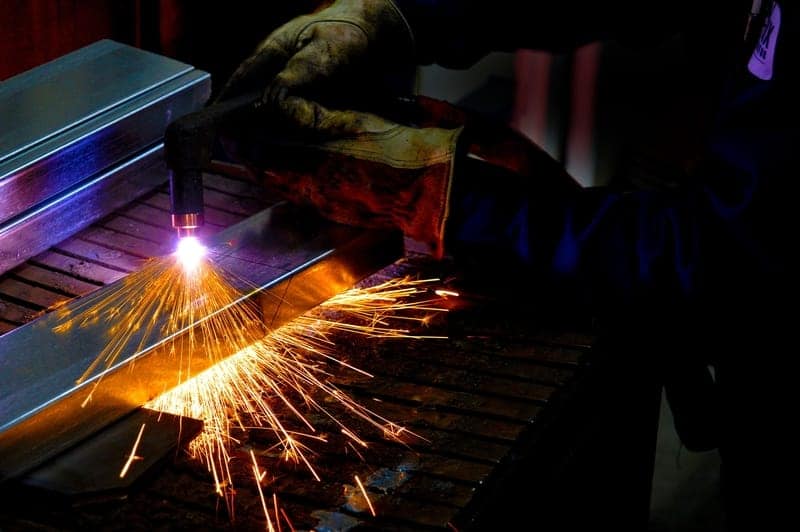 Which metal cutting system would be better to have? An oxyfuel cutting torch? Or a plasma torch?

The obvious answer is to get one of each. However, this isn’t always possible. So if you’re limited to one system or the other, which system is the “right choice”?

As always, it depends on application. Here’s the age-old rule of thumb:

A flame cutting system, or oxyfuel cutting torch, is a practical choice for mild steel over 1 inch thick, whereas a plasma torch is better and more efficient for thinner materials, whether ferrous or non-ferrous.

Of course, though, there are caveats to that. Let’s go over what all that means, and what the exceptions are.

To start, let’s wrap our heads around how these systems work.

Note: this information applies to both CNC-mounted or robotic torches as well as handheld units.

How a Cutting Torch Works

If you think that a cutting torch simply melts the material away, that’s only half the answer.

A cutting torch works by adding a blast of oxygen to the flame which oxidizes the steel and turns it into slag. Essentially, it’s a chemical reaction between the oxygen and the steel. The heat just makes this reaction happen really fast.

Think of it almost as a super fast and controlled rusting.

The flame preheats the steel up to about 1800 degrees F, and the pressurized oxygen both oxidizes and blasts away the material.

So essentially, the thickness of mild steel you can cut is equal to the amount you can heat up and blast with a stream of pressurized oxygen. With larger units, this can get pretty deep – you can cut steel well over a foot thick. It just takes a while.

How a Plasma Cutter Works

This one’s a little more trippy.

Ok, so you know how we commonly think of matter – solid, liquid, and gas.

So here’s how a plasma cutter works: Plasma cutters use a gas like compressed air, nitrogen, oxygen, etc. and send an electric arc through that gas. This turns the gas to plasma, and it rapidly blasts through metal to cut it at high speeds.

That high speed plasma is called the “plasma jet”, and it almost instantly heats the metal to around 30,000-40,000 °F and at extremely high speeds like 20,000 feet per second – this is basically why plasma cutters are so fast. That’s a pretty insane temperature.

Additionally, there is a curtain of gas that shields the cutting area and improved cut quality. It helps keep the cut straighter and thinner.

What Metals Can I Cut?

Plasma cutting really shines in this one – since the plasma is just electrified gas, a plasma cutter will basically cut any material that conducts electricity. Aluminum, steel, stainless, brass, copper, you name it, plasma makes quick work of it.

For oxyfuel cutting torches, the answer is a little more complicated. They’re intended for mild steel, but there’s an asterisk on that statement.

If you’ve played around with one yourself, you’ll know that you actually can cut through thinner aluminum and stainless, as well as other materials. But the cuts will be ugly and messy. Here’s why:

The process is intended to oxidize the metal. Stainless and aluminum don’t really oxidize much. So instead of turning the metal into slag, you’re actually just melting a gap in the material, and the force of the flame is pushing it out. You can’t cut these materials when they’re thick, this more so happens for sheet metal.

So the technical answer is that you can get through these other materials if they’re thin, but it’s gonna be ugly. Also, the surrounding metal will be really affected by the heat, which will mean that you can get some crazy warping (like with stainless) or a massive heat affected zone (like with alloy steel). Basically, it’s just mild steel that’s recommended for cutting torches.

Again, plasma shines. Since it’s working with such insane heat, it’s a really fast cutter. Apples to apples, you’ll never keep up to plasma with a cutting torch.

Oxyfuel torches eat thick steel for breakfast. If you’re trying to get through a 4″ thick steel axle, then the cutting torch is your tool.

The really heavy duty ones can cut through as much as four feet of solid steel. Honestly, it’s pretty unlikely that you’ll encounter this on a regular basis, but you never know, right? The part to remember is that you can slice through an engine block, as long as it’s made of iron and not aluminum.

For most units, though, you can expect to have a max thickness of one foot if you have a big torch nozzle. The smaller the nozzle, the thinner the kerf, and the thinner the material you can cut.

Plasma torches don’t cut nearly as thick. The really heavy duty ones can get up to about 2-3/4″ thick, but it’s not too likely that you’ll get your hands on one of those. The standard industrial ones cut more so around 1″ thick material, and the hobby machines tend to max out at about 1/4″ or 3/8″.

Both systems have consumables – the tips will wear out and there will be small replacement parts. This isn’t a major expense, though.

This is one area where I prefer plasma, though: For oxyfuel, you need to refill your gas bottles. For plasma, you generally only need compressed air.

Technically, the plasma uses a fair bit of electricity

The oxyfuel system is definitely the most portable in terms of being able to strap it down in your truck and slicing up a tractor in the middle of the field. You can take it anywhere that you can carry it.

The plasma cutter is (generally) a smaller unit, so it’s easy to carry, but you need to be able to plug it in. The smaller hobby units are usually around 20-30 pounds. If you’re working in shops, it’s not a problem, but if you’re working on a farm, it can be annoying.

This is a loaded question – both systems have things that the other can’t do.

For oxy acetylene, different torches (welding, cutting or rosebud) can let you weld, heat, hardface, cut, solder, braze, blend and gouge. For cutting, you’re mainly limited to mild steel, but you can weld most metals with it.

For plasma, you can commonly find 3-in-1 little units that will let you cut, TIG, and arc weld. Aside from that, though, a plasma cutter is for cutting.

Oxyfuel torches are pretty straightforward, just pick out the right size nozzle for the job. The only other thing worth making sure of is that you have flashback arrestors installed so nothing goes boom.

There are a few terms worth knowing, though, when you’re looking at buying a plasma torch. Here’s an overview and an explanation of what they mean.

This is referring to what’s used to start the plasma torch, and it’s similar with a TIG welder. Basically, a high frequency, high voltage current is powered through the torch which makes it easier to start cutting.

This makes the piercing point smaller, cleaner, and easier, and it’s handy for thicker materials.

Generally speaking, you don’t need this for hobby machines that are used for thin sheet metal. If anything, a good practice is to pierce the material slightly off the line where you want to cut, then sweep the plasma on to the cut line

This is basically a little wire that keeps the plasma running when it’s not close to the workpiece.

It’s practical for applications like working with expanded metal or mesh. It will keep the machine running consistently for interrupted cutting.

If you’re just wanting to get some work in the garage done, you won’t really need this, and you won’t see much benefit if you’re only cutting sheet metal or slicing apart a car. If you’re doing a lot of mesh-type work, though, it does speed up the process.

A lot of this will be common sense, but it’s worth mentioning.

Wear googles. They work better than safety squints, and you can get some pretty serious eye damage from working for a day in the garage without them.

In terms of how dark your eye protection needs to be, use this rule of thumb: If you’re welding and see blue spots once the torch is off, you need a darker lense.

For plasma cutters, here’s a handy little reference from the American Welding Society:

For most hobby machines, a #5 or #6 shade will do you just fine.

Aside from that, try not to spray your sparks on things that go boom. That includes gas tanks.

Now that you’re armed with a hefty teaspoon of knowledge, let’s take a look at what kind of systems are available so that we can compare cost to capability.

For $200+, you can pick up a little hobbyist made-in-China machine. It should last just fine for intermittent use. Usually they can cut metal up to 1/4″ thick, and they’re really handy to have in your garage.

Usually these units won’t be HF or have a pilot light, but they’re meant for little jobs. Realistically, you probably don’t need to cut 1/4″ steel plate in your garage all that often.

Typically starting around $400 for the Chinese models and $1,000+ for name brand ones, they will cut up to around 1/2″ thick plate and have some features like HF and pilot lights.

You can usually push them to cut up to 3/4″ plate, but around there they’re getting kind of ugly.

These beasts are usually several thousand dollars, depending on how thick you need to cut.

As a point of reference, you can get a 100 amp Tomahawkfrom Lincoln Electric for around $4k-5K. This will let you cut steel up to 1.5″ thick.

For machines larger than this, you’re leaving the realm of what’s possible for hand-held units and needing to have them robot or CNC mounted.

If you already have an oxy acetylene welding setup, you can get just the torch for under $100. If you’re just starting out with oxyfuel, it’s a bit more expensive.

For around $400 you can pick up a full kit, which will include torches (for welding and cutting), nozzles, safety gear, a sparker, a nozzle cleaner, and a bunch of other goodies. There are usually a couple of other things that you’ll need beyond that, though.

You will also need a tank of acetylene and oxygen, as well a cylinder cart. Make sure that it’s a proper cart and that there are chains holding the tanks in place. It will really ruin your day if those things fall over.

Other than that, though, you’re pretty well all set. Oxyfuel systems are really nice because they’re versatile and easy to set up with.

So which system should you get?

Here’s when you should get a plasma cutter:

Here’s when you should get a cutting torch:

Want a review? Here’s a chart that captures the basics:

Do you have anything to add, or any questions? Use the comments below.