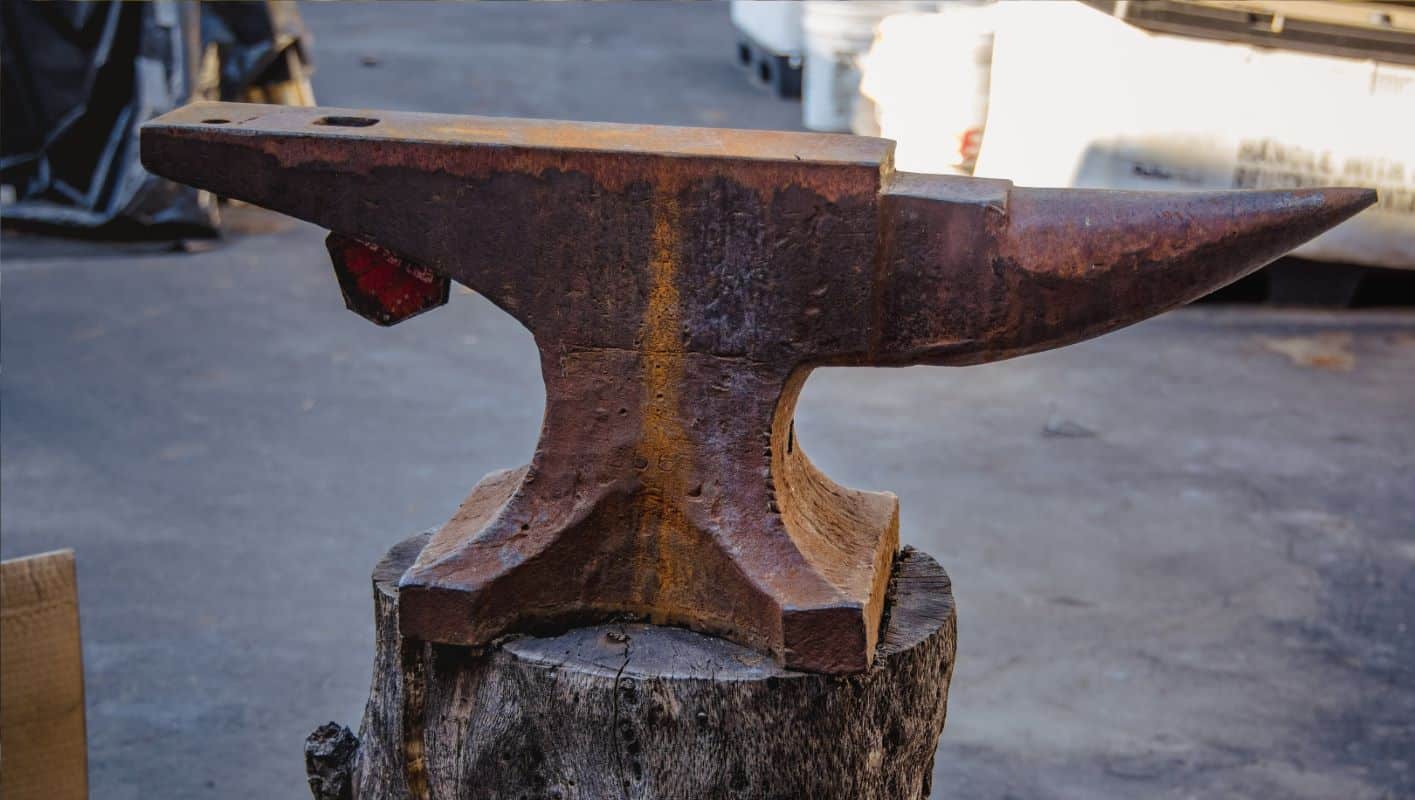 If you’re newly introduced to blacksmithing, you might be wondering about all the funny shapes that make up an anvil. Actually, the physical design on anvils is something that has been refined over hundreds of years, and just about everything serves a specific purpose.

Why do anvils have a point? Anvils have a point on the a part called the horn. This section is used for straightening or curling the metal being forged. The curve of the horn allows for different sizes of bends to be put into the workpiece.

For the sake of understanding some of the common terms, there are five main parts on anvils:

Why the Horn is Useful

In actuality, the horn is generally not the most used part of the anvil.

Blacksmiths will pretty much always spend more time hammering away on the face of the anvil. That’s the flat part on the top.

In fact, despite being the most recognizable part of the anvil, the horn is only used briefly to straighten bars out. It’s not used for hammering out metal to push it into the desired shape.

The horn is typically only used for straightening and bending, not for general forming.

An example of where the horn is particularly useful is for adjusting the curve of horseshoes.

Farriers work to fit the shoes perfectly to a horse’s hoof. This means narrowing or widening the spread of the horseshoe so that it aligns with the natural edge of the hoof.

Of course, the horn isn’t just limited to horseshoes. It’s useful for whenever you want a smooth, even bend in metal.

Some anvils might even have more than one horn, for the sake of giving the blacksmith more options. That’s pretty uncommon, though.

What the Other Parts Are For

So at the beginning I said that there are five main parts of the anvil, each with a specific purpose.

You’re already basically an expert on the horn, but the other four parts are really interesting, too.

The face is hands-down the most frequently used part of the anvil. It’s basically just a hard, flat surface that you can beat on.

Modern anvils have faces made out of hardened steel. Sometimes it’s even a high carbon steel plate welded on to the top so that it’s extra strong.

Commonly, the edges around the face will be somewhat rounded. Some blacksmiths tend to hammer their workpiece on the edges to concentrate more force into small sections of the metal.

This can make the metal move very quickly, but it also leaves an extremely jagged, staircase-looking shape that will need to be straightened and smoothed out afterwards.

Actually, if you’re assessing the condition of an anvil, the edges of the face are one of the most noticeable areas of wear and tear. Worn out or lower quality anvils will often have chipped or broken edges on the face.

The step is the part that’s between the horn and the face.

Unlike the face, the step is supposed to have sharp edges, not rounded ones.

The reason for this is that the step is used to cut metal. Basically, you just lay the metal against the edge of the step, hammer it, and it will slice apart.

It’s not designed for heavy-duty use, though. If you’re using it day in and day out, you will end up damaging it. It’s there for convenience and light-duty use.

If you want to regularly slice metal apart, you need to use the hardy hole.

This is my favorite part of the anvil, essentially because it’s so versatile and only limited by your imagination.

The hardy hole is just a square hole that’s in the face of the anvil. It’s usually big enough to stick your thumb into it.

The cool thing about it is that this is where you can mount your tools.

You can create all sorts of things that can just drop into the hardy hole and turn your anvil into a swiss army knife.

One example is to mount up what basically looks like an axe head or wedge, which allows you to easily chop material into the desired length.

Here’s a picture of what I mean:

You can mount up all sorts of other shapes, too, which can punch all different kinds of shapes into your steel.

Since it’s securely held into that square hole, you can really go to town with beating on these tools.

The pritchel hole is actually used for pritchels. Doesn’t that just clarify everything?

A pritchel is a type of punch that’s used in making horseshoes. It makes the nail holes in the shoe.

Therefore, a pritchel hole is just a clearance hole that allows the punch to go through the metal, instead of risking damage to the anvil face.

This is just the round version of the hardy hole. You can also use it to mount up tools, commonly called pritchel tools.

These are tools that have a round shank and don’t need to be used in any particular orientation, since round things in round holes tend to rotate.

The pritchel hole is generally smaller than the hardy hole, so it does a better job of supporting smaller workpieces when you’re punching through them.

Overall, anvils are extremely versatile tools. Thousands of years ago, they were often just basic, flattish rocks. Today, they’re highly thought out and more useful than most people realize.