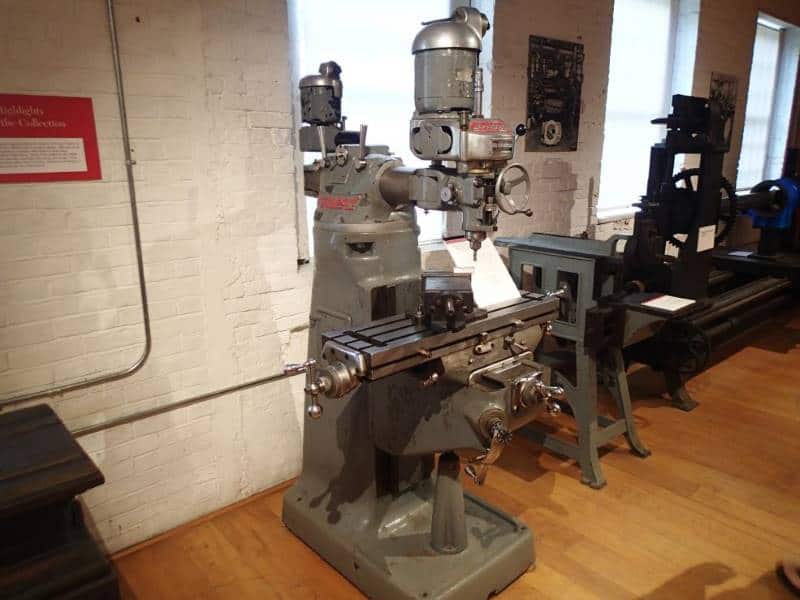 Especially in shops with a lot of baby boomers, you’re going to here the name “Bridgeport” tossed around like a summer salad. What is a Bridgeport?

A Bridgeport mill is a standard manual knee-type vertical milling machine. The reason that many people refer to a manual mill simply as a “Bridgeport” is because it’s one of the most famous brand names that’s found in most machine shops.

To be fair, in modern years Bridgeport has also produced CNC machining centers, but it’s the manual vertical knee mills that really made this a household (for people that live in machine shops) name.

Here’s a bit about why these machines became so popular, what they can do, and what the company is doing today.

This is the machine that really changed the way that modern mills were made.

A lot of people call it the “original multipurpose mill”. It had features that combined the rigidity of a milling machine with the versatility of a drill press, and allowed for more operations to be performed than anything else available at the time.

What was the true game changer, though, was the ram and turret design.

The ram could be unclamped and extended or withdrawn in the Y axis. This meant that there was significantly more possible range in the machining envelope.

You could bolt parts off the edge of the table and drill bolt circles and mill keyseats, meaning that it could accommodate larger parts.

Machinists could also handle much wider plates that a machine of this size could previously allow.

The turret could be unclamped and reoriented at different angles. This meant that features could be milled at nearly any angle with the part still clamped firmly on the mill table.

Previously, machinists had to reposition the part, which would be considerably more time consuming. These developments in the design of milling machines meant that jobs could be done way more efficiently.

The Bridgeport earned a reputation as a surprisingly rigid machine. This meant that machinists could take heavy cuts in tough materials despite the fact that the mill only weighed about 2,000 pounds.

One of the keys to ensuring this ability to take heavy cuts is in its frame.

Bridgeports are made with a solid gray cast iron frame. Gray cast iron has excellent vibration damping characteristics. This means that the impact and vibration of heavy cuts won’t rattle the whole machine loose.

Beyond that, they’re simply well made machines. The ways are hand-scraped, a process where high spots on sliding surfaces are painstakingly worked in to near-perfect flatness. This allows all the moving parts to have a strong and accurate connection, making for a robust and precise machine.

Interestingly, the quill is what originally prompted the construction of the first Bridgeport mill.

In 1936, Rudolf Bannow (president of Bridgeport Pattern and Model Works) and his friend/customer Magnus Wahlstrom developed a milling head with a quill.

In case you’re not sure what a quill is: Think of a drill press. You know how you can pull on the handle and the drill comes down? That’s because it has a quill.

Anyway, back to the story:

Everyone loved this new attachment, because it was saving them so much time and energy. But there was a problem.

People hated having to bolt this beautiful, versatile new milling head on to an old machine. So Bannow and Wahlstrom got to work designing an entire machine to sell along with it. As the story goes, the design for the Bridgeport mill was sketched on a paper bag, and the first complete machine was sold in 1939 in Syracuse, New York.

From there, the manufacturing boom after WWII secured the company, and by 1960 there was a Bridgeport mill in nearly every machine shop and school.

So in a way, you could say that it was the quill that really made the machine.

The series 1 was a general-purpose machine that was a great fit for small repair shops and schools. It was rigid for its size, and definitely accurate.

But some people wanted more muscle.

The Series 2 from Bridgeport was quite literally double the size and weight. This was designed for shops that needed to remove a lot of material fast.

The Series 2 quickly became famous as a heavy duty, versatile and accurate machine. It never outshone the Series 1, since it was considerably more expensive and therefore needed more justification to purchase, but it still was a great machine.

No good idea goes uncopied, and pretty soon there was a swarm of what became called “Bridgeport-Type Machines”.

Many of the companies that copied the Bridgeport design did it so meticulously that the parts were actually interchangeable.

One of the most common copies of this machine was produced by Sharp. With a lower price tag, it quickly became a common sight in machine shops everywhere. Additional machines started to flood in from China and other low-cost countries to compete for market share.

Ultimately, though, these machines weren’t quite as rigid, precise and highly-regarded as the original.

For many shops, these copies performed as well as they needed to. Machinists were still able to produce high quality parts and perform repairs quickly enough.

Really, this is just another example of the truthfulness of the standard answer to the age-old discussion:

Q: What machine should I buy?

A: What do you want to do with it?

It was the milling head design that prompted the development of the Bridgeport mill, and they continued to refine their machine over the years.

Here’s a quick explanation of the various heads that were developed and what made them notable:

There were additional heads that were produced to be retrofitted on other popular mills, such as the H head which would fit Hardinge TM and UM mills.

In 2002, Hardinge bought out Bridgeport and continued producing the Series I machine.

Bridgeport had long been struggling to remain financially viable. A lot of the problem had to do with management issues and a lack of improvement in production efficiency.

When Hardinge took over, they maintained 75% of the production capacity with a facility that is only 10% of the size of the previous production line. Production times have been reduced on average between 50 and 80%.

This was a major victory for Lean manufacturing, showing that American production can compete with low-cost overseas facilities through strategically improving production processes.

Since then, it seems that the Bridgeport legacy has been re-established and these historic machines won’t be going away any time soon.

To add to the offering of Bridgeport mills, Hardinge has also been producing CNC machines, such as the V710 and the V1000.

Have you worked on a Bridgeport machine? What was your experience? Share it in the comments below!