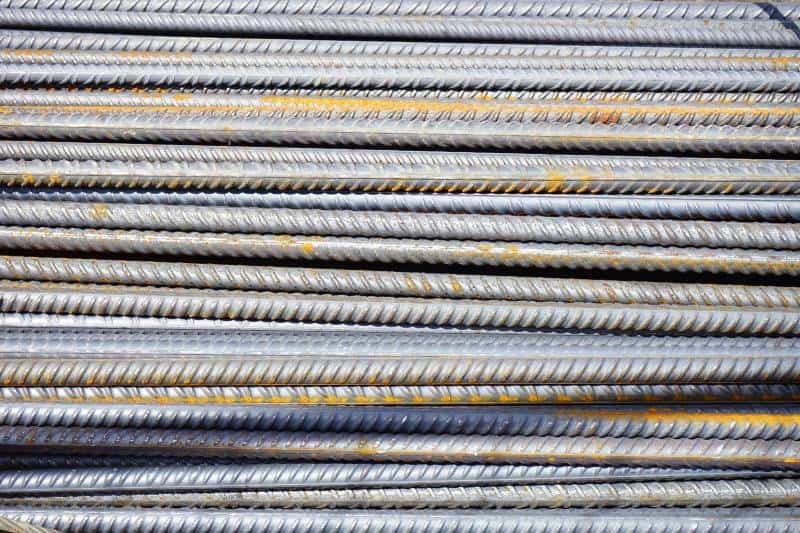 So what kind of metal is rebar?

In reality, there are all kinds of different steels that are used based on application.

For example, the stuff you get from a leftover bridge construction project probably isn’t the same as what you get from a residential house’s foundation.

It will definitely be different from the rebar that’s used for concrete in saltwater.

Here’s where it gets tricky:

Generally the way that rebar is controlled is by its mechanical properties – specifically yield strength. This is because it serves a purely mechanical function when reinforcing concrete.

In other words, what matters is how the metal performs, not necessarily what’s in it.

Let’s go over some of the common kinds of rebar out there, how to tell what it is, what the US designations are, and what you can do with it.

If you’re fortunate enough to get a piece with letters and numbers stamped along the length, that can tell you a lot about what to expect from the metal.

There are four segments that will give you codes. Here’s an overview of what these mean.

The first character is usually a letter. Either way, this designates the mill where it was made.

This probably isn’t very important to you.

Where it matters is in case of mechanical failure. For example, if the stuff is rated at a certain strength, and there’s massive mechanical failure, metallurgical testing might show that the steel didn’t meet the standards. This way, we know who to point the finger at.

This is a number that will tell you the diameter. Honestly, probably not something that you care too much about. Just get a tape measure if you’re not sure.

But for the sake of kicks, here’s how that designation works:

Divide that number by 8 and you’ll get the decimal size in inches. Or just use that to get the size in fractions. Whatever makes you happy.

This is the one you care about. Here’s a table that will show you what these designations mean:

I referenced the ASTM standards for those types of steel for kicks. If you wanna waste $50 and get an 8-page dry read, feel free to buy the standard. Or send me $50 and I’ll type an equally boring document for you to peruse.

The last string of numbers indicate the yield strength of the bar. Basically, how much force is required to rip the sucker in two.

This probably isn’t too important to you. Unless you’re gonna make something that is gonna lift your truck 20 feet in the air, that is.

Yield strength is essentially the point at which yanking material from either end will permanently damage it. Like when the metal starts to stretch and won’t just snap back into shape.

The number represents the KSI value, or a thousand pounds per square inch.

If engineering charts really do it for you, here’s a nifty PDF that will show you exactly what I mean.

By far the most common stuff you’ll come across is carbon steel. This is used both for residential and industrial construction.

The amount that this steel is regulated is hugely variable. As mentioned before, the only thing that really matters is that it meets the minimum requirements for yield strength.

That can be bad news for people that want to make something out of it beyond decorative pieces.

I’ve cut some rebar that was very hard in one section, and then dead soft in another. Remember, there are no requirements for consistency, only that the entire length meets the minimum yield strength.

That means that technically you could have a bar with one section that’s some crazy tough alloy steel, and another that’s some kind of low carbon steel.

How many other ingredients are in there (like sulfur, phosphorous, manganese, silicon, etc) and in what quantities are anyone’s guess.

What’s cool about this one is that it’s classed as weldable. It’s grade A706, marked with a “W”

Other than that, in all honesty it’s not too far different from the carbon steel rebar.

It’s pretty unlikely that you’ll run into this unless you’re on a coast. This is really pricey stuff.

But it is corrosion resistant. That’s the whole point of the construction project dropping the extra cash – when water seeps in the tiny fractures in concrete, they don’t want the rebar to swell and expand with rust and split the concrete wide open.

Stainless won’t do that.

So if you come across some stainless rebar, pat yourself on the back. You’ll be able to make something that won’t rust!

How to Tell What Kind it Is

Heat treat it. See if it gets hard.

Work with it a bit. See how it cuts.

Really, there’s not much else that you can do. Especially since you might get different properties in different sections all along the same length of bar.

Just toss it in a bucket of water for a day or two or three to see if it starts to get some surface rust.

How to Work With It

Only certain kinds of rebar officially can be welded.

That’s not to say that it’s impossible to weld rebar. Technically you can join pretty much any kind of metal with the right conditions. But the welds will be weak and won’t be able to bear as much weight.

Honestly, 99% of the the time you’ll be able to weld it without problem. It’s just that every now and then you’ll get a weird spot that messes you up.

If the stuff that you found is leftover from a job site, ask for the grade that was used. ASTM A706 is the kind that you’re looking for. This will give you a good, strong weld.

Otherwise, just try it and see. Weld two pieces together and try to break it apart. If there’s too much iron, carbon or weird stuff in there then you won’t get too far.

This can be really popular steel to practice with. It can be fun stuff for the typical ironwork projects, like making leaves and brackets and whatnot.

You can also use this as material to fine tune your technique – upsetting, drawing, bending, punching, forge welding, etc.

Technically you can machine it, but this is usually pretty nasty stuff. Lots of hard spots to break your teeth on.

Plus all those ridges are a pain to hold on to. They’ll probably just end up chewing out your vise and chuck jaws.

That said, some of the larger sizes of rebar are actually intended for use as anchors. This means that they’ll thread the ends of the bars to fit on a big nut. That means it’s cuttable. (real word there, spellcheck is wrong)

So yeah, you can do it, but you’ll probably be better off just using some normal round stock of something more consistent.

What you can Make With It

Here’s a list of ideas to try. There’s a definitely mancavery feel to a lot of these projects.

If you’re wanting to have something that doesn’t leave a mess on your hands when you touch it, think about painting it. Make sure that the metal is nice and clean (angle grinder with a wire wheel does wonders) and use an enamel paint.

Have you made anything with rebar? Have any tips? Share it in the comments.