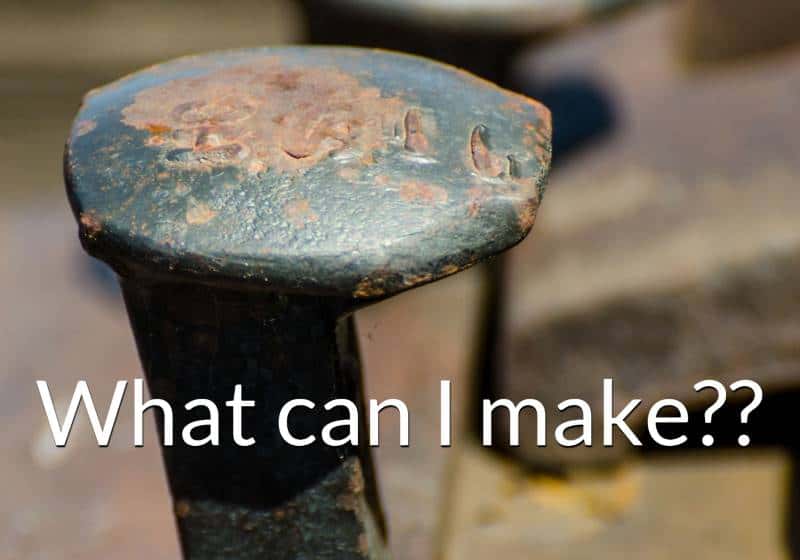 This is a pretty common question from people that are interested in forging. The cool thing with forging is that you can turn a chunk of metal into nearly anything as long as the composition matches the intended use.

So what about railroad spikes?

Railroad spikes are made out of carbon steel and are generally divided into three classes: low carbon, higher carbon and structural steel.

Note that it’s higher carbon and not high carbon. The carbon level isn’t all that high, comparatively speaking.

Let’s go over what’s usually in a railroad spike and why, what you can do with it and how you can work with it.

What’s in a Railroad Spike?

Ok, to understand what the material is like, we should preface this with what it’s intended to do.

A railroad spike holds the track in place. It’s not subjected to wear like the track is. It needs to be strong and tough to do its job.

When a steel has a high carbon content and is heat treated so that it’s hard, it becomes more brittle. If you whack it with a hammer, it’ll crack.

A shattered rail spike holds no track (ancient Chinese proverb? If it’s not it should be). So it’s not practical for it to be too hard.

But a rail spike that’s bent can still do its job. So the metal needs to be soft enough to bend without shattering.

That’s the standard that I’m drawing my information from. It’s a current standard that controls the requirements for railroad spikes, and it was last reviewed back in 2013.

This is where it states that there are 3 general categories of track spike.

This is the lower carbon steel.

This is the higher carbon steel

This is the structural steel. In the standard it actually says that it must conform to the requirements for A36 steel, which is public information.

That’s why a rail spike that’s labeled HC (higher carbon) will only have about 0.4% carbon. That’s about the rough equivalent of a 1045 steel.

1045 is heat treatable. It’s a “workhorse” steel – it’s tough and can handle a load well. That’s why it’s commonly seen in applications like heavy duty gears and shafts. You won’t see it used for cutting tools, since it won’t hold an edge that well.

Rail spikes usually aren’t an exact equivalent though. If anything, they’ll have less carbon and therefore won’t get as hard. Sometimes they’ll be a bit of an alloy, with metals like copper mixed in to help make them more malleable. This will further help to prevent cracking.

Ok, maybe I didn’t do that great of a job with naming that heading – something along the lines of “likely variations” might be better…

Basically, unless you’re buying brand new rail spikes that are certified and you also buy the standard that they were manufactured to (usually around $40-$50), it’s almost impossible to know exactly what’s in them. Unless you have a metallurgist buddy, that is.

From what I’ve researched, the low carbon spikes have been phasing out since the 70’s in most areas in favor of the tougher higher carbon ones.

Really old spikes could be made of anything. Maybe even pure iron. Ideally, get your spikes from leftovers tossed out from rail repair jobs. Or, if you have a batch of items that you want to make and sell, buy new ones. You can usually get them for $2 or $3/pop in small quantities. One place to find them online is McMaster-Carr.

Honestly, the best way to figure out what an old spike is made from is to just test it a bit.

Try heat treating it to see if you can harden it. Since no rail spikes are high carbon steel, you’ll never get a regular file to skate across the hardened metal instead of biting in. That only works when the metal is harder than the file, and railroad spikes don’t get that hard.

Even then, you’re not going to know what the actual composition is from just heat testing since there are a lot of spikes that are low alloys with copper, manganese, and who know what in them.

If you want a reasonably accurate method of determining how hard a metal is and don’t mind spending some money to add to your toolbox, using special hardness testing files is the most economical way of testing a range of hardnesses that I’ve found.

That’s a link to the set that I’ve been using for years. They work surprisingly well and it’s a really handy kit to have if you do your own heat treating. Even if you don’t, it’s nice to know how hard something is before you trash your band saw blades when it never stood a chance of cutting.

It’s not exact as a Rockwell testing machine, but those things usually are usually around $1200. The file set is under $100 so it’s a lot more affordable.

How to Work With Rail Spike

If you want to cut a HC rail spike mechanically (like with a blade instead of with a cutting torch) then you may want to anneal it. Annealing will soften the metal so that you can work with it.

Every metal has a different recipe for heat treating – hardening, tempering, annealing, but the carbon steels generally follow a similar process.

For annealing, heat the metal up until it’s no longer magnetic, which is usually around the 1500 F range. Then do something called a “furnace cool” – essentially a controlled cooldown at a rate of no more that 50 F per hour to get to a minimum of around 1200 F.

The way you usually accomplish that is by doing your heat treating in a furnace. When your workpiece is is up to temp, turn off the furnace but keep the door closed. This will prevent the metal from losing heat quickly, and it will take several hours to cool down.

Usually I just set up for an anneal in the afternoon or evening and let it cool overnight.

Once it’s annealed (if it needs to be) it’s actually very easy to work with. After a good anneal it should be under 20 HRC so it will cut easily.

I’d definitely recommend annealing if you’re planning on drilling them.

If you want to use a band saw, make sure you have at least a bimetal blade and run it at as slow as it’ll go if your saw has variable blade speeds.

If you’re wanting to machine it, a cutting speed of around 60-90 SFPM (surface feet per minute) will work well for high speed steel cutters. You can triple or quadruple that for carbide cutters if you have a solid machine and setup. Just make sure that your clamping is good and rigid.

Torch cutting is a little iffy just because railroad spikes aren’t all that big, so they’ll heat up quite a bit. You’ll get a pretty big HAZ (heat affected zone) that you’ll need to grind out if you want to heat treat or mechanically cut afterwards.

Abrasive cutoff wheels are a great way to chop them up, just don’t let it get red hot. Lift the disc off the cut intermittently to let it cool down if you’re seeing a lot of blue developing on the metal. Grinding is a great way to shape and work with this material too.

Rail spikes are excellent for forging – they’re already a great size to work with and they’re very malleable.

Avoid hitting them when they’re cold, though. They’ll have a tendency to crack, depending on actual composition. Some spikes handle coldworking well, others are quick to break with hammering below around 1200 F to 1500 F. Just keep them nice and hot, only hit them when they’re glowing.

What You Can Make With Rail Spikes

Don’t make knives with them unless they’re just ornamental.

I know that YouTube is full of guys that are doing that, and the idea is cool. There are even a lot of really nice ones that have been made. But they’re all for show – they look great on YouTube, but that’s about it.

There just isn’t enough carbon for them to get properly hard and hold an edge. To make a good quality knife, you’ll need double or triple the carbon compared to what you have in a Higher Carbon spike.

They do make great practice though, so if you’re just learning forging then go to town.

Blacksmithing tools from spike steel are a little hit or miss, they’re not really hard enough to make a good drift or punch (although they’ll work for a bit). But they can work for other things as long as you don’t hit them when they’re cold – they usually don’t take shock too well. I know, avoiding hitting things while blacksmithing is kinda not the point.

There is one practical tool that you can make for blacksmithing though. Drive the spike into a stump, then file the head round. They make great mushroom blocks for hammering out curves or dished shapes since they usually have a very slight curve on the head. You could drive a few into a stump and then file different curves on each head so that you have a few options laid out.

You can also make wedges from them for doing things like locking an axe head on to a shaft.

They do make great ironwork type of pieces, though. Wall hooks and ornamental pieces turn out great. I’ve seen guys make really nice handle guards for big knives with them.

Really, the main appeal for using railroad spikes is in forging or welding projects.

Have you made anything interesting from railroad spikes? Post it in the comments!