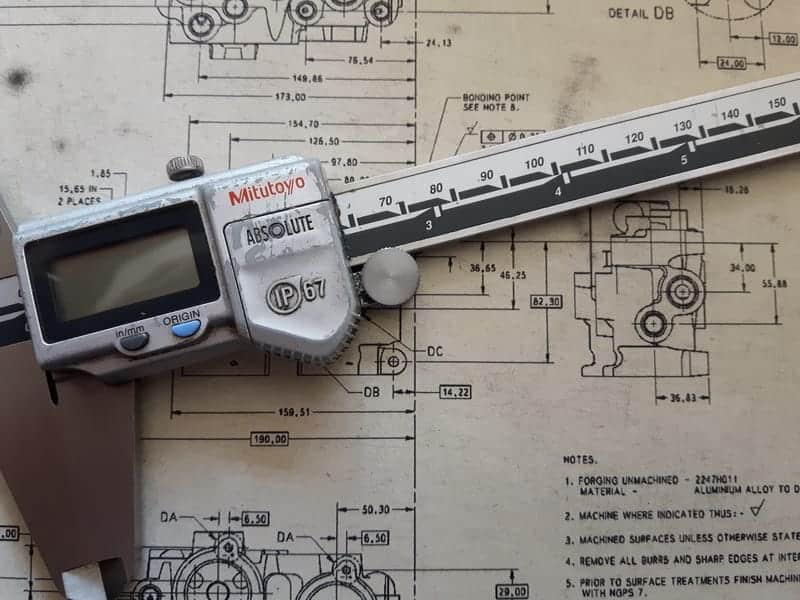 I can guarantee you that there is not a tool more used by machinists than a good set of calipers. They’re easily the most versatile measuring tool that are absolutely necessary for day-to-day use. So what kind of calipers work best?

The best calipers for machinists are absolute scale, name brand digital calipers that are IP67 coolant proof. A good pair can last you decades if you take care of them.

If there is one single tool worth dropping money on, this is the one.

So let’s go over what features are practical (if not necessary) for calipers that are used in a machine shop environment, and at the end of the article I’ll share what calipers I’ve been using daily for 12 years and still work great to this day.

Digital vs Dial vs Vernier

My favorite is by far digital calipers, because they’re the most reliable. They’re also the most expensive.

The reason that I say that they’re the most reliable is because they’re the easiest to read. The numbers are displayed on a digital readout so it’s really straightforward.

Not that the other ones are hard to read, but here’s my case for digital calipers:

If you’re doing a 16-hour OT shift because it’s an emergency repair for a high-paying customer, you’re probably not all that sharp towards the end of the job. With a dial caliper, it’s not impossible to be out by 0.100″ because you misread the position on the scale. It’s not something that happens all that regularly, but it does happen. And Murphy always makes sure that it happens at a critical point.

If the extra few bucks are really going to do you in, dial calipers are still worth having. They’re accurate enough and work perfectly fine, but they’re also prone to mechanical wear and tear – they just have more moving parts. And when I’m working on something that’s easy to scrap, I like to make sure that my tools are as idiot-proof as possible.

Now as for vernier calipers… These are good for scribing lengths on a lathe. That’s about it… in dim light they’re brutal, and it’s easy to be off by a thou or two when you’re squinting at them. There’s a reason that they’re so cheap.

Also, coming from an aerospace background, I’ve done a lot of Gauge R&R (repeatability and reproducibility studies). The high-quality digital calipers always give the most reliable results.

Pretty well all of the high-end digital calipers will have this feature.

In a nutshell, here’s what it means:

When you turn on the calipers, you don’t have to set it to zero first.

Most cheap calipers will need to be “zeroed” before you can use them. The absolute scale isn’t just a convenience, it’s also a sanity check.

Basically, if you start using your calipers and see that it reads 0.001″ when fully closed instead of 0, you know that something is probably up. You likely need to wipe off the jaws to remove any dirt, oil or debris so that you can get an accurate measurement. It might take a few wipes to get it to read correctly. In a machine shop, your hands probably aren’t always the cleanest.

Every now and then, you may need to re-zero a caliper with an absolute scale, but it’s pretty rare. If you’re working in a temperature-controlled area (more or less) and your caliper is in decent shape, you won’t need to re-zero very often.

So is this a mandatory feature? No. But it will reduce your chances of scrapping an accurate part because you had dirt on your tool.

This honestly is a “feature” that means absolutely nothing. Many of the cheap brands will proudly announce the fact that they’re made of “hardened stainless”.

Technically, anything can be “hardened” and still be relatively soft. I’ve had my fair share of cheap calipers (explained later) that were so soft that they were dead unreliable. All that means is that they’ve gone through some kind of heat treating process, but how well they hold up to wear and tear is anyone’s guess.

Hard jaws are absolutely critical to taking accurate measurements. When the jaws are soft, they wear out. They also won’t close to a crisp “0” reading.

This is honestly one of the reasons that I always stick to reputable companies for quality measuring tools. They’re not just trying to see how cheap they can manufacture a tool so they can boost their sales by offering them at a discount. They earn their reputation.

Everyone will say that their calipers are hardened stainless. Only the high-end ones will give you a decade of accurate measurements.

This is just super handy to have.

If your calipers aren’t coolant-proof, then having oil or coolant on the scale will make them fritz out. It could also throw your reading.

Basically, this is just one more thing that will prevent you from making a dumb mistake. When the customer is shouting at you for scrapping a $1500 part, saying “I had coolant on my calipers” probably won’t calm the situation down.

This will also go a long way in contributing to the life span of your tools. Machine shops are dirty, greasy, and in constant contact with coolant. This is regardless of how clean your shop actually is – it’s just a really practical feature.

When picking out a set of calipers, you’re looking for an IP67 dust and water protection level. What this means is that the tool can be dropped in water one meter deep for half an hour and come out unscathed. That’s more than enough to protect it from a machine shop environment.

Until SCUBA machining becomes a thing, that is…

This isn’t a make or break, but the really cheap ones (and some of the “bargain bin” name brand ones) sometimes won’t come with a thumb roller.

It’s just a nice feature to have, especially if you’re trying to get some accurate measurements (like +/-0.001″) – then you can more easily control the amount of pressure that you’re putting in to the measurement.

Again, not the end of the world if you don’t have it, but it’s a nice perk.

Now I’m not saying that all of the off-brand calipers are garbage. I’ve actually found one set that I like. But even still, they don’t last as long or work as smoothly. You get what you pay for.

One of the common problem areas is related to a combination of the hardness and surface finish of the steel. Cheap ones tend to be rough-ground, which means that the tool won’t slide smoothly as you open and close it.

I’ve also had some with parallelism problems – they would bind in some spots along the scale, which made them a total pain to use.

This is more than just a nitpicky complaint. If the calipers don’t slide smoothly, then it’s really hard to get a good “feel” for when you’ve locked in the measurement.

Compare that to one of the major brands out there, like Mitutoyo or Starrett. The surface finish on the slides are excellent, and the operation is smooth and reliable.

You definitely get what you pay for.

The Best Calipers for Machinists

The set that has lasted me 12 years of hard use is the 500-753-20 from Mitutoyo. They are by far the most reliable set that I’ve come across. I still have no trouble measuring +/- 0.001″ with these things repeatably. And yes, this is with a gauge R&R study – I’m not saying this because I’m a crusty machinist that can never be wrong (although I won’t deny that either).

They’re also the most popular ones that you’ll find among quality machinists.

I’d recommend getting the 8″ calipers for your first pair. 6″ always seems to be too small, and the 12″ ones are a bit unwieldy and not quite as accurate for small work. 8″ seems to typically be the sweet spot.

The set from Starrett isn’t bad either, they’re just not quite as popular. It’s sort of like a Chevy vs Ford debate, really. They’re usually slightly cheaper, but even still I always go for Mitutoyo.

The Best Digital Scriber for Machinists

Ok, earlier I said that there was one set of off-brand calipers that are still worth having in your toolbox. Let me explain.

Calipers are super handy to use to mark your workpieces. Seriously, this can be one of the most convenient ways to mark lengths on a lathe workpiece. However, if people see you abusing a nice set of calipers worth hundreds of dollars to mark workpieces, you’ll probably lose a lot of your credibility, not to mention cash.

Have a cheap pair in your toolbox.

These are the ones I use. They’re dirt cheap so it’s really not a big deal if you need to replace them every six months to a year because the jaws are all worn out and dull.

To be clear: I’m not advocating that you use these for final inspection. I don’t trust them for anything that needs to be more accurate than +/-0.003″ (oh, the good old days when that’s all that customers wanted….).

Just use them for marking up your workpieces, and when you know that you’ll be wrecking them. They’ll save you a lot of time and won’t cost you much. It’ll help keep your nice ones in good shape for years.

Well, there you have it. Everything you need to know about picking out a set of calipers so that you can keep up with everyone else. Now go make some chips!