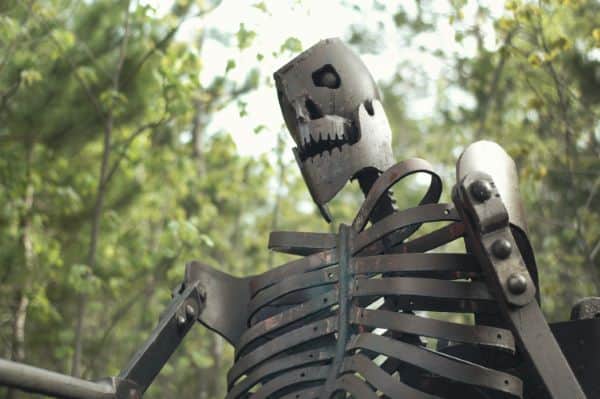 There’s a pretty wide range of reasons why someone might want to weld cast iron to steel. Whether the end use is structural, decorative, or something in between, there are ways of making these two metals stick together.

First, though, for the sake of being dead clear:

Can you weld cast iron to steel? Yes, can iron can be welded to steel. Doing so successfully will depend on the kind of iron being welded, as well as the electrode choice.

In this guide, I’ll go over some ways that you can successfully pull this off, depending on your application. I am in no way claiming that my ways are the best ways, they’re just what’s worked for me and others.

I figured it would be best to get this out of the way first. If you’re doing decorative work, like welding fancy ironwork things on to mild steel for whatever reason, you don’t need to go too crazy on ensuring the strongest connection possible.

If all you want to do is make it stick, then you can probably get away with just using stainless wire with a Flux-Core Arc Welder (FCAW), AKA “gasless MIG”. The high nickel content in stainless will help the iron and steel stick together.

Keep in mind that this is only a solution for thinner materials, and your welds will not be all that strong, but it’s the quick and dirty way of getting it done so that you can get on with your day. To be clear, the welds will crack when you apply enough pressure.

If you’re looking for wire, this one will work (Amazon) and it’s not terribly expensive.

If you need a solution that’s sturdier than stainless flux core wire, you can use MIG or TIG welding with a nickel-based wire or rod. Some places call this Ni-rod. Your local welding supplier is probably your best bet for suggestions on exact grades, as they’ll know what’s available in your area. Also, new types of wire and rods are coming every now and then, so they’ll be the most up to date for these weird applications.

The challenge with welding steel to cast iron is that the cast iron cracks really easily. Once this happens, it’s hard to recover from.

One way to handle this is by controlling the cool-down of the cast iron. Some people do things like bury the weld it hot sand or cover it with a ceramic fiber blanket with a high temp rating (like the one here on Amazon).

At this point, you’re catering mostly to the cast iron, since the steel is generally highly weldable. I’d highly recommend that you read through my guide to welding cast iron, as it has a lot of tips on how to avoid cracking. Just remember to use the nickel filler and treat the rest as if it’s all cast iron.

I have heard of other guys using special techniques for welding cast iron to steel, although I haven’t tried them out myself.

One such technique involves laying a nickel weld bead on each piece separately, then welding over your nickel bead to join the two together. It supposedly helps with penetration, and lets you focus on getting the weld to work properly on the iron independently.

Again, I haven’t tried that one myself. I probably will next time I need to weld cast iron to steel. Honestly though it’s not too often that I have to do this, and I prefer brazing anyway.

I always avoid welding cast iron if I can help it. It’s hard to know if there are cracks that are going to propagate over time and then fail at the worst possible occasion.

My personal preference is to use mechanical fasteners whenever possible. Cast iron is pretty easy to cut (although it is dirty), so there’s often a way to drill and tap a hole for a bolt or drill a hole for a pin of some sort.

If that’s not possible, brazing is a great solution. All you need is an oxyfuel torch and some good flux-core braze and you’re all set to make a wonderful mess.

In all seriousness, brazing is a totally different animal compared to welding. I’d personally recommend trying out brazing on different materials if you haven’t done it before successfully. Maybe try out some copper pipes, then steel, then try cast iron.

Brazing is a great skill to learn, but it is its own skill. Don’t expect great results on the first, second, or tenth attempts. That said, it works great on iron and I’d highly recommend it.

There are essentially four different types of iron, and some are easier to work with than others. They’re white, gray, malleable, and ductile iron.

Unless you’re doing something unusual, you’re most likely going to be seeing gray cast iron. When it’s cracked, the iron looks gray. Compare that to white cast iron, which looks white when cracked. It makes you wonder where they got the names from.

The difference between the two is that white cast iron is harder but more brittle than gray iron. In other words, white is harder to weld because of cracking issues. Generally, you’re best off just keeping clear of it.

Malleable cast iron is just white iron that’s been slowly cooled after it’s been cast into shape. The slow cooling process makes it less brittle. As it relates to welding, though, it’s essentially just white cast iron. You won’t have enough control to cool the iron back down so that it returns to its malleable state in the weld area.

Ductile cast iron is wonderful. It’s much less brittle than the other irons, and this is because it’s a cocktail of alloying elements, like magnesium. This means it’s less likely to crack when welding. It also means that it’s more expensive, so it’s not as common as gray cast iron.

You’re most likely to run into ductile cast iron when you’re working with pipe. Typically, it’ll have something to identify it as ductile (like “DI” or “ductile” cast into the flange).

Also, gray cast iron is generally smoother, and ductile looks like it’s been beaten with a hammer (peened). If you’re still not sure, try to figure out how old the iron is. Ductile only became popular around the 70’s.

At the end of the day, if you have to weld it, then just weld it. It will either work or it won’t.