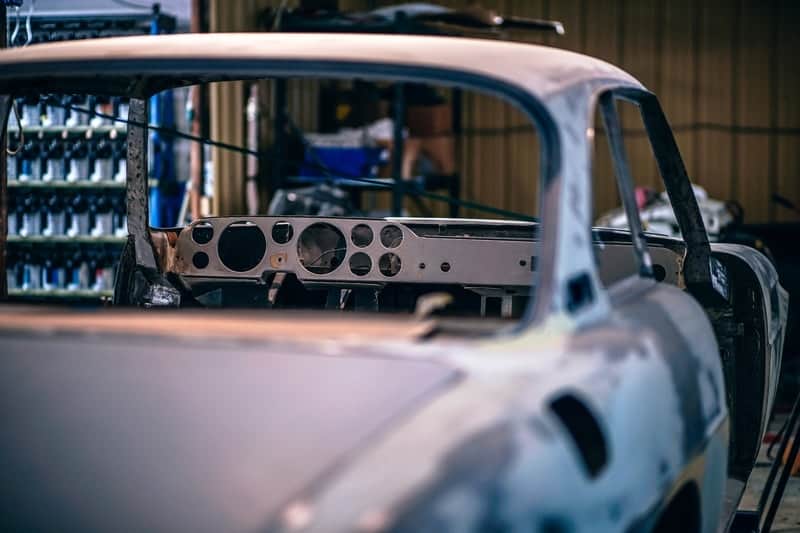 Lots of people are surprised when they hear that aluminum can be annealed. Since it’s already a soft material, why do you need to make it softer?

Actually, not all kinds of aluminum can be annealed. It’s only certain grades. In this article, I’ll go over what grades can be annealed, what you gain by annealing them, and an awesome trick that will let you get it right every time.

How to Get Annealing Right Every Time by Hand

If you already know that the grade you’re working with can be annealed, and it’s worth doing, here’s how you can nail the annealing (almost) every time:

Yeah, that stupidly cheap little permanent marker. You’ve probably got 3 in your toolbox right now. It doesn’t matter which kind. It doesn’t even really need to be Sharpie brand (although I don’t know why you wouldn’t want to use them).

Scribble all over the piece of aluminum. Don’t worry about covering it 100%, just enough to leave a mark on every general area.

Now get out your torch. Start heating up the part. Don’t heat it up to fast, and keep the flame moving over the whole part to keep the heat even. You don’t want hot spots. It’s actually really easy to overheat and melt the material (annealing happens at a temp just a hair under the melting point), so be patient and take your time.

You’ll see the sharpie marks changing color. Then, at a certain temperature, they’ll pretty well disappear. That’s the sweet spot that you’re looking for. Quench the aluminum in water and you’re done!

The cool thing about this method is that it gives you a lot of options for heating up the aluminum, based on what you have. You can use an oxyacetylene torch, a propane torch, whatever’s on hand that can get the material up to around 775 F. This is the ultimate DIY way of annealing aluminum.

If you’re one of the strange people that doesn’t have a Sharpie in your toolbox, there are a few other ways to achieve the same result:

To be clear, this isn’t technically considered a full anneal. Fully annealing aluminum requires very controlled ovens and specific soak times. Partial annealing like this though will give you the ability to form it more easily without it cracking.

Note on carbon soot method: It will take a little bit of skill to know how thick to apply the carbon soot. How much you need to put on will change based on how thick the metal is. If it’s only around 0.020″ thick, you’ll need to put on a really light, not even fully black layer. Otherwise the soot will take too long to burn off an you’ll end up melting through the part. Try it on a practice piece a few times to get a feel for it.

Pro tip: If you really want to nail the temperatures, you can pick up special marking sticks that will change from opaque to clear within 1% of the intended temperature. Just look up “temperature indicating sticks”.

There are a few areas where annealing aluminum this way makes absolute sense. Here’s a quick list of some examples:

Pipe Bending: It can be tricky to bend the aluminum tubes without them cracking, or at least turning white. Annealing them is a great way of having tube that’s retained its strength.

Tube Flattening: If you’re making something structural with tubes, you might want to flatten the ends so you can drill them to pass a bolt through securely. Annealing is a great way to get a nice clean form. I’ve done 2″ diameter tube with a 1/16″ wall, but I’m sure that you could make it quite a bit larger than that. Annealing will allow the flat to be squashed without deforming an excessive amount of the tube – the bends will be nice and crisp.

Flat Bar Bending: I’ve done this with flat bar as big as 1/2″ x 4″ quite successfully. Flat bar can be a pain to bend since it’s really prone to cracking. I definitely recommend torch annealing it for forming whenever possible.

The cool this with torch annealing is that it’s so easy to localize. Just anneal the section to be bent, you don’t need to touch the rest of it. Once it’s formed, the bent areas will likely work harden and regain a good amount of their strength, and the parts that you didn’t anneal will be untouched.

How to Anneal Aluminum with a Heat Treating Oven

Obviously, this is going to really be dependent on the grade of aluminum. That said, the basic process is generally the same. Heat it up to a certain temperature, hold it at that temperature, then cool it down. After you’re done working on it, it’s pretty easy to restore the temper of the aluminum with a little bit more heat treating.

So here are a few common grades of aluminum that you might want to heat treat, along with the oven annealing instructions:

Ok so after you anneal and finish working with the aluminum, you might want to restore the previous heat treat. If you don’t, you might be fine, or you might have some cracking later on. It just depends on how important the part you’re working on is.

I won’t get into all the different ways of heat treating every grade of aluminum and how to achieve every temper, that would easily make up an entire article of its own. Since this one is specifically about annealing, just be aware that it might be worthwhile to restore the heat treat and temper on anything that you’ve annealed.

What Annealing Does to Aluminum

Since aluminum is already such soft stuff, what can you gain from annealing it?

The main reason to anneal aluminum is to improve malleability. Any involved forming can lead to cracking or fatiguing the material, but annealing can reduce these problems.

Quick note: Avoid machining aluminum in its annealed state – it’s really sticky, and it doesn’t cut cleanly any more. It’ll be harder to get a nice surface finish that’s not all galled. It’s also reasonably likely that the material will gum up, weld itself on to your cutting tools, and cause catastophic failure that everyone else in the shop will hear. Try to re-heat treat any annealed parts before machining if possible.

If you bend aluminum cold and without annealing it, you’ll probably see that the stretched side turns kinda white. These are small little cracks that are forming on the surface of the material.

It’s usually not a big deal, but under some conditions, this might be a problem. For example, if it’s a high performance part on which you’re relying to have maximum strength, the cracking with be a big issue. Applications where the bent aluminum is exposed to vibrations can be another time when annealing makes sense. Or if it’s exposed to hot/cold (even summer and winter in Northern areas).

Whenever you’re doing some real forming with the metal, when you’re trying to stretch it, shrink it, or deep draw it, you should at least consider annealing it.

Keep in mind that you may need to anneal it several times as you’re forming it, since aluminum will work-harden and become stiff again. It can also lose the anneal over time – some grades will only hold it for an hour, some might hold it for a year. Aluminum can be funny stuff once you get to know it.

What Kinds of Aluminum can be Annealed

Here’s a list of wrought grades and information as to whether they’re practical for annealing as well:

Here’s an explanation of some of the extra codes you’ll find on the grade designation that will help you understand what condition the aluminum is currently in:

Ok, that’s about everything you’ll need to know about annealing. Hopefully this helps you out.

Keep in mind that you might need to try the process out a little before you risk messing up something valuable. See if you can get a little piece of the exact aluminum you’re working on so that you can see exactly how it responds.

Any questions? Other tips? Write them in the comments!