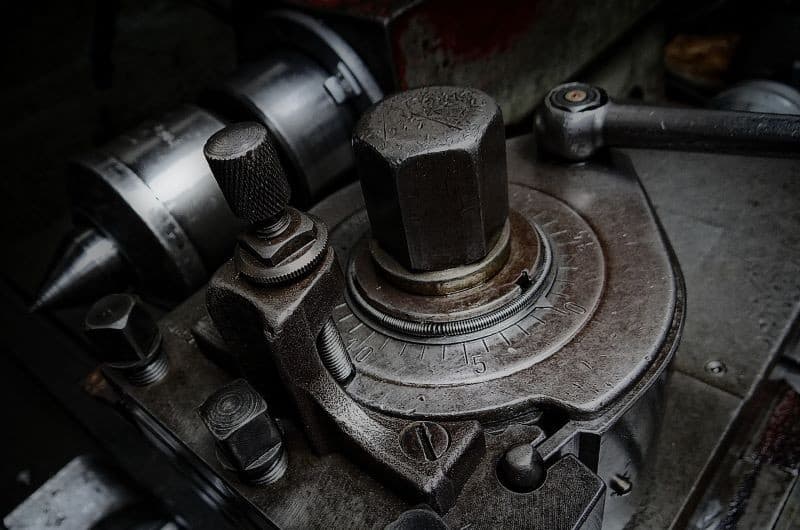 Wanting to move your lathe but not sure if what you have in mind will work? Been there, done that. Broke the chain, too (although it was more the chain’s fault than mine…. *ahem*). Anyway, this is where you’ll find the answer to your question.

How much does a lathe weigh? The weight of a lathe obviously depends on how big it is. A small toolroom lathe will usually only weigh a few hundred pounds. A “regular” lathe usually weighs somewhere around 1500-3500 pounds, and a large, heavy duty lathe can weigh several tons.

If that’s not enough information for you, I’ll give you some examples of manual lathes along with how much they weigh. That’ll let you more or less guesstimate how much your particular machine might weigh.

For starters, there might be a really easy way of finding this out nearly exactly. Look in the machine’s manual. If you don’t have it, see if you can Google it. Type in the machine make and model and “manual” in the search bar. It should have the basic stats for your machine in there, including its weight and lifting instructions.

Ok, so if that doesn’t work, here are a few examples that might be able to give you a reasonable idea of weight.

These don’t need too much explanation. If you’re looking to ship something like a really tiny Sherline hobby lathe, you’re looking at something in the range of 20-30 pounds soaking wet. Kind of the thing that you can almost fit in your pocket. Ok, maybe not quite, but you get the idea.

For one of the popular mini 7 x 14 hobby lathes, you’re looking at something between 80-100 pounds. You should have no problem lifting this thing by yourself if you’re in reasonably good shape.

Possibly one of the most common old toolroom lathes is the 9″ swing South Bend. These go all the way back to the 30’s, so you’ll find them tucked away in the corners of machine shops all over. Hardinge is another really popular brand.

Obviously, the weight will be dependent on how long the machine is. For the old machines, the smallest South Bend 3′ bed (16″ between centers) model has a shipping weight of 355 pounds, whereas the largest 4-1/2′ bed (34″ between centers) is 430 pounds. These are the ones that require a bench. Generally, this is no problem for solid two guys to lift and move around, although something like an engine hoist is handy.

For something a little bigger that includes the “bench”, the weight spikes significantly. By the bench, I mean that it’s on its own stand or cabinet. Usually these older stands were cast steel or iron, and pretty heavy. They usually weigh somewhere in the 800-1,000 pound range. A good engine hoist or A-frame is definitely a good idea.

That’s for the old machines. That said, the newer machines usually aren’t that different. If it’s ways are around 4′ long, expect it to weight somewhere around 500-1,000 pounds.

There is however, a huge exception to this rule. Some of the old Eastern European lathes were made from a single solid iron casting, and those things are insanely heavy. Here’s an example of one that the manufacturer classed as a toolroom lathe:

A little bigger than toolroom lathes, these are the guys that usually have a 13″ swing or more. Usually, they’re somewhere in the 1,000-1,500 pound range. Here are a couple examples:

A Jet 13″ swing with 40″ between centers comes in at about 1,200 pounds. This would be seen by most as a pretty light duty, small machine by most guys.

A Clausing Colchester with a 15-1/4″ swing and 30″ between centers (a pretty common machine to see in schools around the US) weighs about 3,100 pounds.

In other words, most of these machines in the lower to mid range of this class could be pretty easily carried in the back of a pickup truck. It’d be a bit iffy on the bigger ones though. A trailer would be preferable.

Generally, you’d think of these machines as the ones having something like 24″ or so swing, but the length is really what’s variable. You could have 48″ between centers. I’ve also worked on machines that had 20′ between centers.

For the really long lathes, you’ll have to unbolt the length of the machine, as the ways will be broken up in sections. Otherwise, you could risk cracking or bending the machine if you were to pick it up in the middle.

Anyway, for the sake of an example:

The largest lathe that I’ve personally worked on had a 7′ chuck and 40′ between centers. It could hold a workpiece up to 70,000 lbs. I thought it was pretty big, but there are some absolute monsters out there.

These are generally custom builds, so there’s no way to know the weight of the machine unless you can find it on the name plate or in the manual. To move them around, they’ll be taken apart in many sections. Otherwise, it’s just not feasible.

When you’re looking to buy a machine, knowing the weight can actually be a good indication of the original quality of the lathe.

For example, if you’re trying to decide between two machines that are similar in size and horsepower, but one weighs 2,000 pounds and the other weighs 3,500 pounds, you’ve got a pretty good indication of which machine is going to be noticeably more rigid. The more weight the machine has, the most stable and vibration-resistant it is.

At the end of the day, though, it’s best to see if you can find out the specific weight of your particular machine. Even from year to year, the same make and model of machine will vary somewhat in weight depending on design changes.

Ultimately, there’s only one way to be dead sure. Weigh it.

Tips for Moving a Lathe

Aside from the little hobby lathes, you really need to know what you’re doing to move a lathe around. Even if you’re just moving it from one corner of the shop to the other, you could do some permanent damage if you lift it wrong.

The large majority of machines will have a threaded hole in between the ways of the bed, at the balance point of the machine. Thread in an eye bolt and use this as a hoist point. Aside from the machine being balanced when suspended, it’s also designed to be able to hold its own weight from this position.

If this isn’t an option for whatever reason, then you can use a forklift if you have one big enough. Make sure that the forks are securely under the feet of the machine, not holding it up by anything that wasn’t designed to bear weight (like sheet metal).

For small lathes, engine hoists or A-frames can work great for getting the lathe around. Forklifts are also viable when used carefully. Always check the rating of the lifting device against the actual weight of the load.

For larger machines that need to travel across a smooth floor, you should definitely consider picking up some machine skates. These are extremely safe (both for people and the machine) and they’re really easy to use. And, for the price, you can’t go wrong. You can check out some for sale online here.

Lathe beds are really prone to warping if they’re not perfectly level. Never leave the machine on a forklift or suspended for more time than it needs to be.

Once the machine is in place, take the time to level it properly. This means adjusting the height of the feet, using the lathe ways as a reference. Check the level at a few points along the ways to make sure it’s good.

The tool you use to check level needs to be really accurate, too. Do not use a carpenters level for this. It’s nowhere near accurate enough.

I use this digital level from Mitutoyo (it’s one of those every day tools for me). It’s super easy to use and it works great. In terms of accuracy, though, this would be the bare minimum in terms of what would be acceptable. It’s a great tool to keep in your box anyway.

You could also use an extreme precision bubble level to get your machine perfect. This one will show you 0.0002″ per foot. That’s insanely accurate and your lathe will be in great shape for decades if you can keep everything else maintained. If you want a budget option that’s good enough, here it is.

It’s also good practice to check the level on a lathe once or twice a year. Concrete actually can shift over time, and keeping the machine level means keeping it accurate.

Anyway, that’s what I’ve got on lathe weight and how to move them. Try not to hurt yourself.