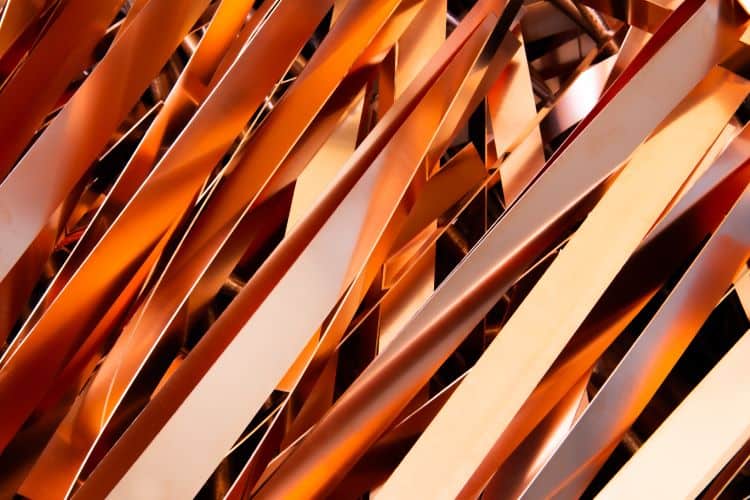 Copper is an extremely common metal, and you probably come in contact with it in everyday life much more than you realize. In fact, the average home has about 400 pounds of copper in its construction. An average car contains about 50 pounds.

Some of the most common uses of copper include:

Reasons That Copper Is So Useful

Some of the properties of copper really make it stand out from other metals. Understanding its properties makes it easy to understand why it’s so common.

Some of the main useful properties of copper are:

Fun fact: About 40% of the world’s copper consumption is taken from recycled materials.

About half of the copper produced today will end up being used in construction, most commonly in either electrical cables or plumbing.

The reason that it’s so popular for electrical wires is that it conducts electricity extremely well, AND it resists cracking.

Another common metal for electrical wires is aluminum, but aluminum is nowhere near as malleable as copper. The result is that aluminum wire connections can corrode and crack over time, which results in fire hazards.

That’s why you don’t see aluminum being used any more in residential wiring. Copper is more expensive, but it’s also safer.

Another really common application of copper is in plumbing. It’s practically the perfect material for clean water pipes.

Here’s why copper pipes are used in the overwhelming majority of homes in North America:

All that said, no material is perfect. Copper has a hard time against acids, meaning that water from wells might require the use of plastics. Copper is also quite a bit more expensive than plastic pipes.

Anyway, electrical wires/lines and water pipes are definitely the most common application. Here are a few others:

While nearly-pure copper is definitely useful in its own right, copper is also a popular “ingredient” in other metal alloys.

The two most common alloys are brass and bronze.

Brass, which is usually 2/3rds copper and 1/3rd zinc, is higher strength than pure copper and is more resistant to corrosion. It also generally has a goldish color, which makes it popular for anything decorative.

Bronze is even higher strength. It’s typically made by mixing copper with tin, although there can be other metals used in addition to these. Aside from art, bronze is also used in applications where reduced friction and high strength is needed, like with mechanical bushings.

Stainless steel is often used in areas that need to be clean, but it doesn’t actually do anything to kill off unwanted bacteria or viruses. It’s just easy to clean.

Other metals though, like silver and copper, actually kill microbes on contact. The problem is that these metals are much more expensive than stainless steel.

One of the effective ways that this can be used inexpensively is by plating. A very thin layer of copper is bonded to the surface of the metal, and suddenly you get all the perks of a copper surface. Just don’t scratch it.

This is really useful in places like hospitals or high touch points in public areas.

The surface doesn’t need to be pure copper, either. Alloys like brass are effective too.

Copper has some distinctions from other types of metals used in cookware.

It’s extremely fast heating since it conducts heat so well. On the other hand, it also cools down extremely quickly.

Think of it as being on the opposite end of the spectrum of cast iron, which heats slowly but retains heat for a long time.

Copper pans are generally used for delicate meats, like fish, when you want to quickly sear them but not overcook them.

One thing to keep in mind is that you don’t actually want your food contacting the copper itself when it’s being cooked. Acids that are normally found in just about any food will break down the copper and leech it into your food.

That’s why pretty well all copper cookware will be lined with another material. This prevents direct contact between the copper and your food.

Most commonly, cookware will be lined with zinc, although there are a few alternatives out there.

Copper roofing kind of goes in and out of style. Some people love it, some people hate it, but there are a few interesting features of copper that make it stand out.

For one, copper is just about the most durable roofing material that you can get. Some copper roofs have been around for as much as 1,000 years and are still in use!

This is because copper has insane corrosion resistance. The green patina that forms as corrosion on copper actually creates a strong, protective barrier.

For example, the Statue of Liberty, which is exposed to seawater continuously, has been around for over a hundred years, and the patina is only about the thickness of two sheets of paper.

Beyond lasting longer than you will, copper is also a very “green” choice. It tends to lower heating/cooling bills due to its ability to efficiently reflect the sun’s UV rays instead of absorbing them.

The downside to using copper in architecture is that it’s extremely expensive and challenging to properly install. Since it’s so malleable, it’s easy to dent and deform thin sheets of copper if you’re not careful.

According to some estimates, copper coins have been used for around 2,500 years.

Today, copper is used for more than just pennies. Most coins are made from copper and then plated with other metals (like nickel) to get increased scratch resistance and the desired colors.

There are a few reasons why copper stands out as a great material for coinmaking:

In modern times, there’s actually another cool perk of using copper in coins:

Since copper is so conductive, vending machines can sense if a coin is legit or not by testing the electrical resistance. This is what keeps you from hoarding thousands of bags of Doritos by scamming the machines with random round pieces of metal.

The bottom line is that copper is massively useful. Despite being used for literally thousands of years, it’s not going to be made obsolete in the foreseeable future.